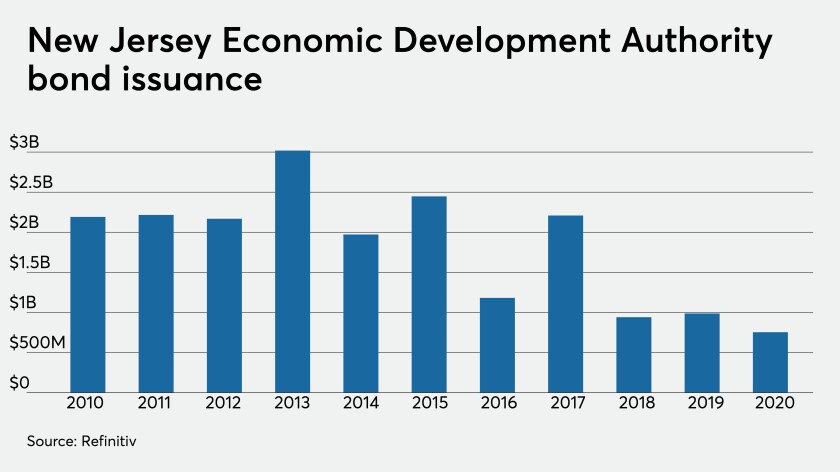 The New Jersey Economic Development Authority will kick off the new year with a $350 million social bond offering to finance school facility upgrades.

The NJEDA is hitting the market with a school facility construction borrowing designated as “social” bonds on Jan. 7. The negotiated offering will be led by Loops Capital Markets with Chiesa Shahinian & Giantomasi PC operating as bond counsel.

The deal is rated BBB-plus by Fitch Ratings, Baa1 by Moody’s Investors Service and BBB by S&P Global Ratings. Fitch and Moody’s assign negative rating outlooks while S&P has the debt at stable.

The transaction is pricing amid spread tightening of New Jersey appropriation debt with NJEDA bonds at 5% coupons maturing in 2044 trading earlier this week at around 115 basis points above the MMD triple-A scale, according to Greg Saulnier, municipal analyst at Refinitiv MMD. These same bonds traded as wide as between 350 and 400 bps during the height of the COVID-19 pandemic compared to around 95 in February, according to Saulnier.

Moody’s analyst Baye Larsen noted that the bonds benefit from the “essential nature” of the school construction projects. She noted that the bonds contain a legal structure that includes the need for annual legislative appropriation by lawmakers of state lease rental payments that are equal to debt service.

“A large majority of the state’s net tax-supported debt is subject to appropriation, and the importance of maintaining access to the capital markets provides strong incentive for the state to make these appropriations,” Larsen wrote in a Dec. 21 report. “However, bondholders do not have a direct lien on dedicated revenues and there are no remedies in event of non-appropriation.”

Larsen noted that the negative outlook reflects expectations that the state of New Jersey will face obstacles restoring budgetary balance over the next two fiscal years due to massive pandemic-related revenue losses, a lack of meaningful reserves and a growing pension burden.

The NJEDA’s credit ratings are all one notch below New Jersey general obligation bonds, which are the second lowest of all U.S. states ahead of only Illinois.

S&P downgraded New Jersey GOs one notch on Nov. 6, ahead of state selling $3.7 billion of tax-exempt COVID-19 emergency bonds to BBB-plus from A-minus, citing projected revenue losses over the next two budget cycles due to the pandemic.

The Garden State is rated A3 by Moody’s, A-minus by Fitch and A by Kroll Bond Rating Agency.

The NJEDA press office did not immediately respond for comment on the upcoming transaction.