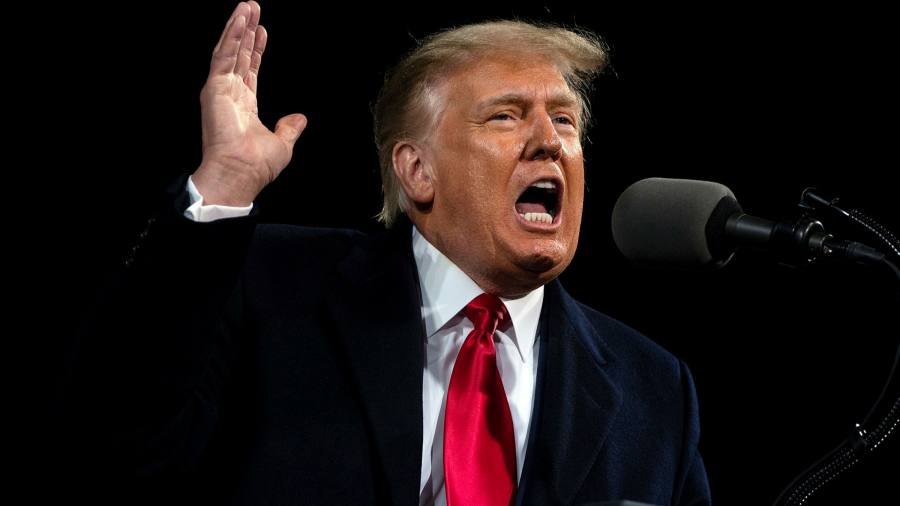 Donald Trump has blasted Republicans who plan to support certifying Joe Biden’s victory in the US election as members of a “surrender caucus”, deepening the intraparty split over the looming transfer of power in Washington.

In a series of tweets on Monday morning, the US president pressured lawmakers from his own party to join his long-shot attempt to overturn the results of the November vote, less than three weeks before Mr Biden is due to be sworn in as president.

Mr Trump is facing a backlash from across the political spectrum over a call he made during the weekend to Brad Raffensperger, Georgia’s secretary of state, urging him to “find” extra votes to reverse Mr Biden’s win in the southern state.

On Wednesday, a joint session of Congress is expected to certify Mr Biden’s Electoral College victory. Twelve Republican senators, led by Ted Cruz of Texas and Josh Hawley of Missouri, have said they would object to Mr Biden’s win based on unfounded allegations of voter fraud, although many Republicans are expected to accept the election result — triggering Mr Trump’s wrath.

“The ‘Surrender Caucus’ within the Republican party will go down in infamy as weak and ineffective ‘guardians’ of our Nation, who were willing to accept the certification of fraudulent presidential numbers!” Mr Trump wrote.

Earlier in the day, Mr Trump singled out Tom Cotton — typically a reliable ally of the president on Capitol Hill — for criticism after the senator from Arkansas said he would not join other Republican objectors to Mr Biden’s win.

“@SenTomCotton Republicans have pluses & minuses, but one thing is sure, THEY NEVER FORGET!”, the president wrote.

In a statement on Monday, Rob Portman, the Republican senator from Ohio, defied Mr Trump’s wishes and said he would not object to Mr Biden’s certification.

“The Constitution created a system for electing the President through the Electoral College that ensures the people and the states hold the power, not Congress. I cannot support allowing Congress to thwart the will of the voters,” he said.

Mr Trump’s increasingly frantic efforts to avoid leaving the White House on January 20 have created a febrile atmosphere in Washington and stoked new fears over the prospects for a smooth transition on Inauguration Day.

Democrats said they were disturbed by Mr Trump’s approach. At a rally ahead of two pivotal Senate run-off races in Georgia on Tuesday, Kamala Harris, the incoming vice-president, attacked Mr Trump for his call to Mr Raffensperger.

“It was certainly the voice of desperation, most certainly that. And it was a bald, bald-faced, bold abuse of power by the president of the United States,” she said on Sunday night.

Nevertheless, Mr Trump’s most loyal backers on Capitol Hill have stuck by him. Marsha Blackburn, the Republican senator from Tennessee and one of the upper-chamber lawmakers intending to object to the certification of Mr Biden’s victory, told Fox News on Monday that the president’s call to Mr Raffensperger searching for votes was “not a helpful call”.

But she reaffirmed the plan to object to Mr Biden’s victory and establish a commission to report back on fraud claims within 10 days.

“When there are allegations of fraud and when there’s all this conversation that is taking place around the election results, one of the things that we should do is define the problem and then offer an action item that will get us to a solution,” she said. “And that’s exactly what we are doing.”