Two of the most prominent Republicans in Washington defied Donald Trump’s last-gasp effort to nullify Joe Biden’s victory, with the party’s leader in the Senate warning that “democracy would enter a death spiral” if Congress overturned the result.

Mitch McConnell, the Republican Senate majority leader, said the presidential election was “not actually particularly close” and that if the challenge by the president’s allies were successful it “would damage our republic forever”.

His address on the floor of the Senate came as vice-president Mike Pence also refused to participate in Mr Trump’s scheme to overthrow the election result, arguing he lacked the authority as presiding officer in the Senate to tamper with the vote count in the outgoing president’s favour.

“My oath to support and defend the constitution constrains me from claiming unilateral authority to determine which electoral votes should be counted and which should not,” Mr Pence wrote in a letter to members of Congress.

The defiance by Mr McConnell and Mr Pence came as a joint session of Congress was held to certify Mr Biden’s victory. Objections by diehard Trump loyalists forced a debate over the outgoing president’s baseless allegations of fraud in the November polls, which was expected to delay the certification for several hours.

The electoral college certification by Congress on Wednesday marks the final — and normally routine — stage in the US election, paving the way for the inauguration of the new president on January 20.

At 1pm, US lawmakers from the House and the Senate gathered for a joint session presided over by vice-president Mike Pence to read aloud the certificates of the electoral votes contained in mahogany boxes after being sent by each state to Washington DC.

The process is usually swift and ceremonial. But Donald Trump, the US president and his Republican allies in Congress, have been counting on it as a last ditch, if quixotic, attempt to overturn Joe Biden’s victory.

Once representatives from each state, in alphabetical order, read out their result, lawmakers can object, but the objection is only formalised if it is presented in writing by a member of each chamber.

At that point, the count is halted for up to two hours as lawmakers consider the objection and vote on it. Republicans are expected to mount objections to the counts in several states, although this is expected to delay rather than scupper Mr Biden’s certification.

The vice-president normally declares the winner of the election at the end of the proceedings.

The joint session took place against the backdrop of angry clashes between pro-Trump supporters and police in Washington and as some lawmakers and political staffers were told to evacuate their offices.

Mr McConnell and Mr Pence rebuked Mr Trump shortly after he used a speech to supporters in Washington to lash out at Republicans refusing to back his attempt to cling to power.

“They’re weak Republicans. They’re pathetic Republicans,” Mr Trump said of lawmakers who have not joined the effort to challenge the vote certification in a politically explosive but futile effort to block Mr Biden from being sworn in on January 20.

In his speech, Mr Trump repeated his erroneous claim that Mr Pence had the power to overturn the 2020 result. “Mike Pence is gonna have to come through for us. And if he doesn’t, that will be a sad day for our country,” he said.

Mr Pence was one of several Republicans who Mr Trump lambasted in what is likely to be one of his last speeches before leaving office. He called Georgia’s Republican governor Brian Kemp “one of the dumbest governors in the United States” and berated his former attorney-general Bill Barr because he did not want to serve as his “personal attorney”.

And he described the three conservative justices he appointed to the Supreme Court as ungrateful, after the court declined to hear his challenges to the election. “They couldn’t give a damn,” said Mr Trump.

The president said he had no plans to concede the 2020 election: “We will never give up. We will never concede.”

Pro-Trump protests broke out in the nation’s capital on Tuesday, with supporters of the outgoing president congregating around the White House and the Capitol. Washington police made 10 arrests at the protests between Tuesday afternoon and Wednesday morning as they struggled to contain violent clashes.

According to police reports, the 10 people were arrested for assault, including assault of police officers, and illegal possession of firearms and high-capacity ammunition chambers. 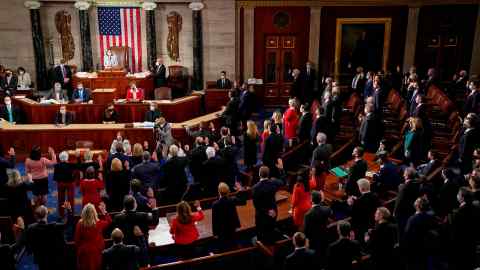 While two of the arrested people were from Maryland, which borders Washington DC, others had travelled to the capital from Colorado, Texas, North Carolina and Florida.