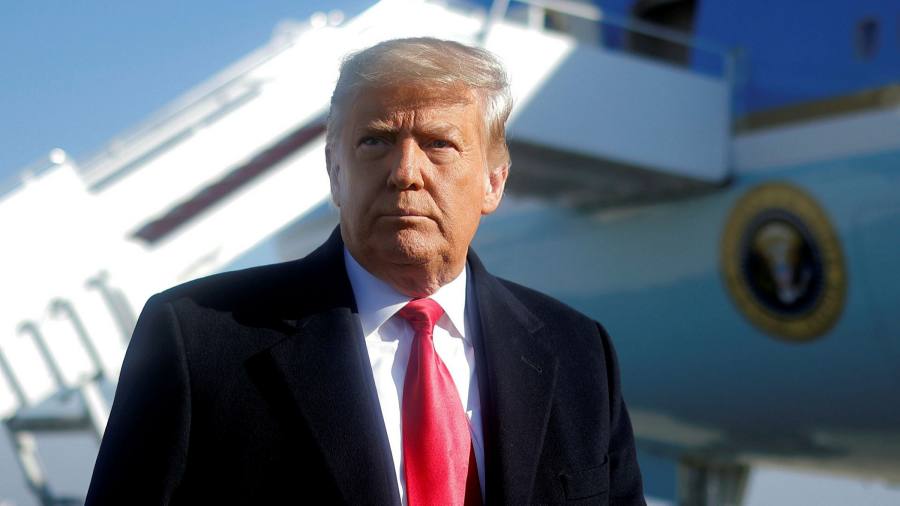 Donald Trump warned that efforts by Democrats to impeach him for a second time were “causing tremendous anger” in the US and said he bore no responsibility for a violent attack on the US Capitol by his supporters last week.

In his first unscripted remarks since the rampage in the nation’s capital, Mr Trump described the move to impeach him as a “continuation of the greatest witch hunt in the history of politics”.

“I think it’s causing tremendous anger . . . and tremendous danger to our country,” Mr Trump told reporters on Tuesday as he prepared to fly to the US-Mexico border to tout his record on immigration.

“We want no violence,” the president added, as he defended a fiery speech he gave to thousands of supporters before an angry pro-Trump mob launched an assault on the US Capitol: “People thought what I said was totally appropriate.”

The president’s remarks came as the House of Representatives prepared to vote on a measure that will pave the way for his impeachment unless Mike Pence, his vice-president, removes him from office by invoking the 25th amendment.

Mr Pence is not expected to respond to the demand to invoke the amendment — which allows a president who is deemed unfit to be ejected from office — setting the stage for the second impeachment of Mr Trump with just a week until Joe Biden is inaugurated as president.

Nancy Pelosi, the Democratic House speaker, has said the lower chamber of Congress will vote to impeach the president as early as Wednesday on a charge of “incitement of insurrection” over his culpability for the attack on the Capitol.

As the Trump presidency comes to a dramatic end, the FBI has warned of possible armed protests at state capitals, while officials in Washington stepped up security to prevent more violence at the inauguration on January 20. Mr Trump on Monday declared a state of emergency in the nation’s capital.

The attack on the US Capitol has resulted in a rift between Mr Trump and Mr Pence, who did not speak after the Wednesday rampage until a meeting on Monday, according to US media reports.

As Mr Pence hunkered down during the assault, Mr Trump slammed him on Twitter for not preventing the Senate from certifying Mr Biden’s victory.

While Mr Pence has privately expressed reservations about how Mr Trump handled the situation last week, he has shown no indication that he will work with the Democrats to remove the president.

Several Republicans, including Senators Lisa Murkowski of Alaska and Pat Toomey from Pennsylvania, have called on Mr Trump to resign. Very few GOP senators have signalled that they will vote to convict Mr Trump if the Senate holds a trial after his impeachment in the House

Mr Trump has become increasingly isolated in his final days, with three cabinet secretaries and his deputy national security adviser resigning in the wake of the attack alongside a handful of administration staffers.

Twitter and Facebook have both blocked Mr Trump from using his accounts on their platforms, depriving him of his most valuable form of communication.

Axios reported that Kevin McCarthy, the Republican House minority leader who has been a close ally, rejected claims by Mr Trump in a phone call that the attack on the Capitol was perpetrated by antifa. Mr Trump frequently claims, without evidence, that far-left “anti-fascist” activists are to blame for violent protests in the US.