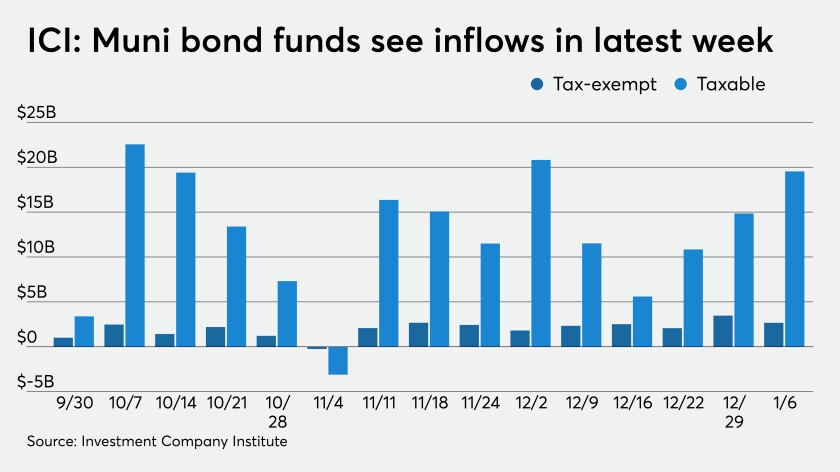 Markets were mostly unmoved in either direction as the U.S. House of Representatives was preparing to vote to impeach President Trump, a week after a mob took over the Capitol.

In the primary, Barclays Capital priced $250 million of electric system general revenue notes for the Long Island Power Authority (A2/A/A/). Bonds mature in 2025 with a 1% coupon and yield 0.50%, callable in September 2023.

The growing demand for tax-exempt bonds with attractive yields that began in 2020, continues to be a theme into the early part of the new year on the buy side of the municipal market.

“The entire story year to date is the continued vibrant demand for bonds with yield,” Tom Doe, president of Municipal Market Analytics, said on Wednesday. “Credit concerns have been pushed aside, presumably because of optimism for a return to normal with vaccine rollout and the support from the Biden relief packages.”

But, while some investors are putting yield ahead of credit concerns, others are focused on how credit will be impacted by market technicals in the coming year.

As municipals continue to exhibit resilience amid the COVID-19 crisis, some key credit-related issues warrant attention in 2021 and beyond, according to a quarterly credit commentary from Cumberland Advisors.

“The prospects for municipal credits in the coming year depend on the shape and speed of the recovery,” she wrote. “Some are very long-tailed risks, such as pensions or population declines, which will challenge management to reinvent the raising of revenues and the provision of services to municipalities.”

“The lingering risk of short-term shocks, such as COVID-19 or, for smaller municipalities, the loss of a major employer will fully challenge management.”

Pension funding remains one of the biggest risks to municipal credit, according to Healy.

“COVID-19 has had shocking effects on revenues and expenses, and municipalities may be tempted to reduce payments to pension plans, but that choice could lead to bigger problems down the road,” she warned.

The management of this will warrant close monitoring by market participants, Healy said, adding that although the stock market has performed well in the past couple of years, assumed rates of return in projecting pension funding remain above actualized levels.

“Of concern is the news of very underfunded pensions or growing unfunded pension liabilities, which could crowd out services and in the longer run could take priority over bondholders,” Healy wrote.

She said another issue for pensions is shifting demographics, as evidenced by the recent census results that show the Northeast and other regions are losing population to southern states and states with lower tax rates.

Some pension underfunding stems from population moves, some from technological advances, and some from longer lifespans, which is the most concerning issue for pensions, she noted.

Pension obligation bonds are sometimes issued to add funds to a plan, Healy pointed out. This strategy, she said, can reduce the annually required contribution, though debt service on the POBs still has to be repaid.

“A decline in pension fund market value shortly after investing the proceeds of the POBs could result in the need for higher annual contributions than hoped for,” she said.

“COVID-19 accelerated many trends that were in place, such as remote learning and working,” she said, pointing to a survey of mayors that indicated expanding broadband was one of the most important ongoing capital investments for municipalities.

Municipalities were made vulnerable to cybercrime, so individuals, businesses, and governments “cannot afford not to invest in cybersecurity.”

“This issue has and will continue to be an area of focus for municipalities,” and some have appointed a chief cybersecurity officer or other layers of management dedicated to cybersecurity issues, Healy wrote.

Increasing tax rates and fees anticipated over the next few years will likely make tax-exempt bonds more “desirable,” according to Healy, who said this is a key concern on her radar.

Meanwhile, the firm will also keep a watchful eye on the demand for impact investing, which has grown in the wake of COVID-19 and the economic shutdown, and could potentially make a difference in returns. Social issues, such as income inequality, home affordability, and access to healthcare, as well as environmental risks, such as hurricanes and wildfires all helped boost the desire for impact investing, Healy said.

“The increase in the use of taxable municipal bonds has attracted crossover buyers, such as sovereign wealth fund pension plans, which have for years been concerned about impact,” she said. “Thus ESG-related credits could see more demand and possibly better performance because of these buyers,” including the potential for more attractive returns.

“Better [artificial intelligence] and other tools are being developed to measure impact and returns, so ESG is an area to watch,” she added.

Economic indicators
The consumer price index came in as expected in December, with the headline number up 0.4% and the core 0.1% higher, while year-over-year CPI rose 1.4% (compared to a 1.3% expectation) and the core increased 1.6%.

Since the Federal Reserve wants inflation of 2%, the year-over-year core number suggests “there is more work to be done in terms of monetary accommodation to reach their long-term target,” said Jeff MacDonald, head of Fixed-Income Strategies at Fiduciary Trust International.

While CPI should stay soft through the first quarter at least, he said, expectations for future inflation should be considered, and they “have accelerated meaningfully in recent months, largely based on election-related hopes for more stimulus and active rollout of the vaccine.”

TIPS breakeven spread, which he called “a good market-based indicator of future inflation expectations,” gained 25 to 50 basis points in the latest quarter, suggesting average inflation in the five- to 10-year range “in excess of 2%.”

MacDonald attributes the rising inflation expectations to “a combination of increased stimulus, normalization of the global economy in late 2021, and a release of pent up demand which should all put upward pressure on prices in the wake of the COVID experience.”

While gas prices grew in the latest CPI report, they’re still off 15% year-over-year. Energy prices rose seven consecutive months, he said, but are still 7% lower than year ago levels.

Also, since the Fed will let inflation run a little hotter to compensate for the downside misses of the past decade, Al-Hussainy said, “higher inflation does not automatically translate to higher rates because the Fed wants to see some inflation. As a result, we believe that investors should not be focused on hedging against inflation in 2021. But it’s OK: inflation hedges like gold and TIPS don’t work very well anyway.”

The Beige Book, released Wednesday, indicated modest increases in activity in most districts, but two regions reported little or no change, and two districts (New York and Philadelphia) reporting a drop in economic activity.

Prices rose modestly in most districts, the report said, with “prices for construction and building materials, steel products, and shipping services” having the largest increases. Several regions reported respondents were able to pass price hikes to customers, “especially in the retail, wholesale trade, and manufacturing sectors, and some cited plans to increase selling prices in coming months.”

Spending varied, with retail sales and leisure and hospitality sectors the hardest hit as the number of coronavirus cases rose. More people turned to online shopping for the holidays, according to the report.

Auto sales declined, while manufacturing “continued to recover in almost all districts, despite increasing reports of supply chain challenges.”

Respondents generally said employment was rising slowly “and the recovery remained incomplete. However, a growing number of districts reported a drop in employment levels relative to the previous reporting period.”

Manufacturing, transportation and construction saw the strongest demand for workers.

In the previous week, muni funds saw a revised inflow of $3.482 billion, originally reported as a $3.472 billion inflow, ICI said.

Taxable bond funds saw combined inflows of $19.527 billion in the latest reporting week after a revised inflow of $8.347 billion in the prior week, originally reported as a $10.843 billion inflow.

ICI said the total combined estimated inflows from all long-term mutual funds and ETFs were $23.877 billion after a revised inflow of $18.378 billion in the previous week, originally reported as a $17.554 billion inflow.