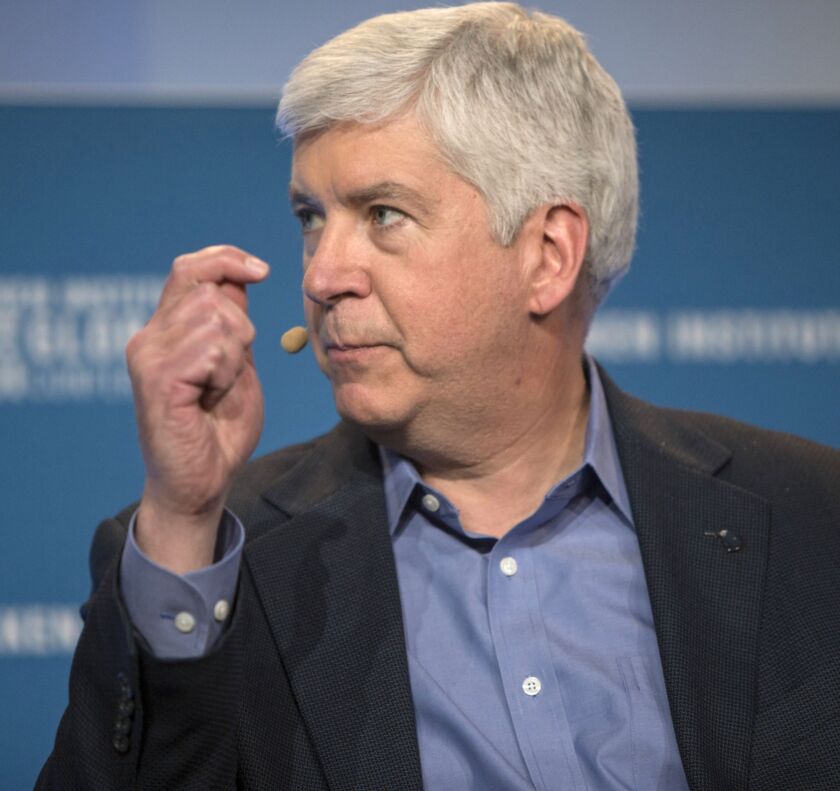 Former Michigan Gov. Rick Snyder and two emergency managers he appointed were arraigned along with six others Thursday on criminal charges for alleged actions in the 2014 Flint water contamination crisis that occurred while the city was under state fiscal oversight.

The charges filed against the former governor who served from 2011 to 2019 are only misdemeanors — two counts of willful neglect of duty — but a conviction can carry a prison term of up to one year for each count and/or a $1,000 fine. The announcement Thursday also marks a seismic turn in the criminal probe and represents the first time a sitting or former Michigan governor has faced such charges for actions stemming from their time in office.

The grand jury indictment accuses Snyder of neglecting his mandatory legal duty to properly supervise officials appointed by him and failing to declare a state of emergency and/or disaster earlier than he did.

The crisis began in 2014. In January 2016, Snyder declared a state of emergency in the city and in his state of the state apologized for the crisis and pledged to fix the problem but he came under attack for failing to prevent or move quickly to correct the contamination.

“We must remember that the Flint Water Crisis is not some relic of the past. At this very moment, the people of Flint continue to suffer from the categorical failure of public officials at all levels of government, who trampled upon their trust, and evaded accountability for far too long,” Hammoud said at a news conference.

Snyder who appeared alongside his attorney Brian Lennon from Genesee County Jail for a remote court hearing — entered a plea of not guilty. The attorney general’s office asked Genesee District Judge Christopher Odette to require Snyder to surrender his passport. The judge declined to do so because the charges are misdemeanors, but said the former governor must seek court permission to leave the state. He was released on a personal bond for $10,000 on each count.

“The two misdemeanor charges filed today against former Gov. Rick Snyder are wholly without merit and this entire situation is puzzling,” Lennon, a partner at Warner Norcross + Judd LLP, said in a statement.

The crisis occurred after the city’s contract with Detroit to receive Lake Huron water ended and the city began pulling its water supply from the Flint River water in April 2014 while awaiting the completion of the $285 million bond-financed Karegnondi water pipeline carrying Lake Huron water to Flint and other Genesee County communities.

The city failed to properly treat the Flint River water, triggering lead contamination because of pipe corrosion. It was not abated until the city in the fall of 2015 shifted back to Detroit-supplied water. The lead poisoning resulted in long-term damage to residents, especially children whose developing brains are considered most at risk to damage from lead poisoning.

In addition to the lead poisoning of household water the crisis is blamed for a 2014-15 Legionnaires’ disease outbreak in the Flint region that led to the deaths of at least 12 and sickened another 79 individuals.

Residents last year sued the Karegnondi bond underwriters in federal court accusing them of aiding and abetting in the events that led to the lead poisoning crisis.

Nessel dismissed charges filed by her predecessor in 2019 and launched a new investigation and code of conduct rules established what’s known as a “conflict wall.” Nessel said she chose to work to resolve more than 100 pending civil lawsuits filed against the state while handing the criminal probe into officials to Hammoud and Worthy.

Nessel and Gov. Gretchen Whitmer last year announced a $600 million state settlement and Whitmer signed legislation last month paving the way for a bond deal to cover the costs. The settlement brings to about $1 billion the money Whitmer and Snyder committed to the city to cover compensation, lead pipe replacement, water filters, and healthcare.

Nessel and Whitmer are Democrats and former attorney general Bill Schuette and Snyder are Republicans.

“This case has nothing to do with partisanship. It has to do with human decency, resurrecting the complete abandonment of the people of Flint, and finally, finally, holding people accountable for the unspeakable alleged atrocities that harmed this city for years,” prosecutor Worthy said.

When pressed on the decision to pursue charges against Snyder, the prosecutors said they followed the evidence. “There are not velvet ropes in our criminal justice system. Nobody, no matter how powerful or well-connected is above accountability when they commit a crime,” Hammoud said.

The charges, which were approved by a grand jury, accuse the city’s former emergency managers of alleged felony criminal wrongdoing. They had also faced charges under the prior probe. Both entered pleas of not guilty Thursday.

Former Flint Emergency Manager Gerald Ambrose was charged four counts of misconduct in office, each a felony that carries a possible five-year sentence and/or $10,000 fine.

Earley oversaw the decision to change the city’s water source to the Flint River. A March 13, 2014, order signed by Ambrose for a water main cut-in at the water plant cleared the way for the switch. Flint exited from state financial receivership on April 10, 2018, after seven years under oversight.

Ambrose is accused of misconduct while acting as finance director “by allowing the City of Flint to incur debt in violation of the Home Rule City Act” and misconduct during his tenure as the state-appointed emergency manager for “rejecting opportunities to switch the city of Flint’s drinking water source back to Detroit Water and Sewerage Department, when he had knowledge of ongoing quality issues and health risks associated with Flint’s drinking water as well as local opposition to continued use of the Flint River.”

Nessel in 2019 dropped the pending charges against 15 officials leveled from the prior probe, saying all available evidence had not been pursued. The prior investigation was conducted by a private law firm appointed by Schuette.

Nessel turned to a grand jury. Seventh Circuit Genesee County’s chief judge appointed Judge David Newblatt to serve as a one-man grand jury and the charges stem from evidence he received and evaluated from the prosecutors.

Prosecutors defended the office’s silence as word spread earlier this week that Snyder would face charges, citing statutes that prevent their disclosure of grand jury charges until defendants are arraigned.

While the prosecutors said grand jury rules bar them from discussing evidence, information laid out in the Schuette probe and litigation against the state and underwriters paint a sweeping picture of alleged misconduct across all levels of governments.

The seeds of the crisis began several years before the bond issue when the city — then under state emergency management — agreed to participate with Genesee County in financing the construction of the new water pipeline.

Flint pledged to repay about 34% of the $220 million 2014 bond issue that provided initial financing for the 63-mile pipeline led by Genesee County. The deal was recognized by The Bond Buyer as Midwest Deal of the Year.

Flint reverted to Detroit water in October 2015 and signed a long-term contract to continue receiving water through the Great Lakes Water Authority, a regional agency that is the successor agency to Detroit’s system.

The accusations in the underwriter lawsuit and Schuette cases cite the city’s efforts to bypass debt limit caps to participate in the bond financing.

The lawsuit filed in October in the U.S. District Court for the Eastern District of Michigan seeks up to $2 billion in damages from JPMorgan Chase & Co., Wells Fargo Bank, and Stifel Nicolaus & Co. Inc.

The Flint crisis cast a pall on the state’s emergency management programs that has supporters and critics and no municipalities are currently under management.