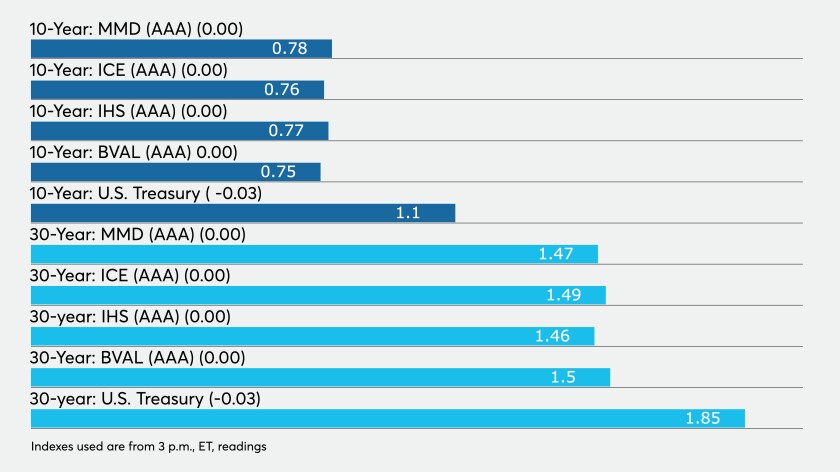 Municipals were quiet and remained steady on Friday as U.S. Treasuries dipped slightly following President-elect Joe Biden’s address Thursday night that outlined plans for a $1.9 trillion relief package and the market prepared for a three-day weekend.

In his speech, Biden called for a new round of stimulus checks and pandemic control measures.

“Everyone was waiting for the Biden speech, which was very supportive and promising, but there is concern out there for what will get implemented in total and how long it will take,” a New York trader said.

Market analysts, he said, were expecting more than the $350 billion announced to aid cities and states, but he also hinted that the potential for another round of stimulus, potentially $1,400 checks under Biden’s plan — could be on the horizon and could aid the economy.

Triple-A municipal benchmarks were unchanged from top to bottom Friday.

“We were on good terms Friday, maybe a tad softer just to move some things in the market,” the trader said.

“With municipal bonds being at multi-year highs on a relative-value basis, they are not moving with Treasuries today, but are still firm,” Roberto Roffo, managing director and portfolio manager at SWBC Investment Company said Friday afternoon just before the market close.

“While there is a potential for rate volatility based on how Treasuries perform and the rich valuations of municipals, I expect demand to outpace supply, allowing municipals to outperform Treasuries for the near term,” he said.

With supply expectations lower than 2020, Roffo said, the majority of the new issues will most likely be purchased with money from bonds being called or maturing, which will be “setting up a strong technical environment moving forward.”

The New York trader said Friday’s tone was quiet and uneventful due to the market’s anticipation of Monday’s Martin Luther King holiday observance.

Economic indicators
Friday’s data showed economic weakness. Consumers, the drivers of the economy, pulled back during the holiday season and have exhibited weakening sentiment.

“The latest data points to a notable slowdown in consumer spending as we move through a difficult winter,” according to Morgan Stanley Researchers, led by Ellen Zentner. “Looking ahead, the new COVID relief package, the recovery in services, and continued strength in housing remain key supports for personal consumption expenditures.”

“Consumers lost ground in December,” said Yelena Maleyev, economist at Grant Thornton. “Core retail sales, which feed into GDP, fell 1.9%, pointing to a very dismal end to 2020. As we enter 2021, we are seeing more targeted lockdowns as new, more contagious virus variants spread. The road to herd immunity is filled with potholes as delays in distribution and administration of vaccines occur.”

A positive note: despite the decline, sales are 2.9% better than last December and ex-autos are 1.1% ahead of their year-ago pace.

Economists polled by IFR Markets expected sales to be flat in the month and down 0.1% ex-autos.

Part of the decline can be attributed to the rise in COVID-19 cases, which led to some new restrictions, but the drops were much less than the 8.2% and 14.7% plunges seen in March and April, noted Roiana Reid, U.S. economist at Berenberg Capital Markets.

“Non-store retail sales (includes online) have declined in three of the last four months,” she said. “This downtrend is concerning given that this sales category is the most resilient to pandemic restrictions and its recent poor performance coincides with the holiday shopping season.”

“A drop in retail sales is not surprising, given the ongoing impact of COVID-19 as well as local stay-at-home orders in some parts of the country,” said Gary Zimmerman, CEO of MaxMyInterest. “However, with each passing month of decreased consumer expenditure comes increases in consumer savings. When the pandemic begins to subside, likely driven by an uptick in vaccination levels later this year, increased consumer spending coupled with pent-up demand could lead to inflationary pressures in the second half of 2021 and into 2022.”

In another sign of consumer sluggishness, the University of Michigan’s consumer sentiment index fell to 79.2 in January from 80.7 in December, while the current conditions index slid to 87.7 from 90.0 and the expectations index fell to 73.8 from 74.6.

Economists expected the headline index to fall to 80.0.

The two reports are “consistent,” said Steve Skancke, chief economic advisor at Keel Point. “Until the vaccine roll-out reduces the COVID-19 new infection, hospitalization and mortality rates enough to allow for reopening of the economy, consumer spending and economic recovery will remain weak.”

The reports suggest a delayed “economic and job recovery and will reduce prior early estimates of 2020 fourth quarter economic growth and rebound expectations for the first quarter of 2021,” he added.

But the Dec. 27 stimulus package, “will help consumer confidence and spending going forward in 2021 after a weak start in January,” Skancke said. “The new Biden fiscal support measures announced on Jan. 14 will boost growth further growth and employment later in 2021, if enacted.”

Separately, the Empire State Manufacturing Survey reported “little growth in manufacturing activity in New York State in January,” with the general business conditions index slipping to 3.5 from 4.9 in December.

Economists expected the index to rise to 6.0.

The future general business conditions index fell to 31.9 in January from 36.3 in December, while new orders and shipments improves and unfilled orders fell. Expectations for prices were mixed, with prices paid seen rising slightly and prices received falling. The number of employees expectations index also rose.

Also released Friday, the producer price index rose 0.3% in December following a 0.1% gain in November, while the core rose 0.1% both months.

Economists expected a 0.3% increase in the headline number, but a 0.2% climb in the core.

Economists expected a 0.4% increase in production, with a 73.5% capacity use level.

Also released Friday, Business inventories rose 0.5% in November, as expected by economists, after a 0.8% gain in October.

Primary market
About $6.01 billion is expected to arrive into the primary market in a holiday-shortened week next week, according to Ipreo and The Bond Buyer, up from total sales of $3.78 billion this week.

There are $4.77 billion scheduled for negotiated sale next week, versus a revised $1.72 billion sold this week, according to Thomson.

The largest negotiated deal is a combined $1.5 billion taxable and tax-exempt refunding from the New Jersey Turnpike Authority.

Bonds scheduled for competitive sale next week total $1.24 billion, compared with $2.06 billion this week, according to Thomson.

The supply-demand imbalance continues to hang over the primary market during the January reinvestment season, traders noted. “The primary market is still in high demand,” according to the New York trader.

The heavy demand was also demonstrated by investors placing $2.6 billion into municipal bond funds this week — continuing a recent trend.

“I expect that to continue, especially with the likelihood of increased tax rates this year,” Roffo said. “The positive cash inflows have created a powerful demand for munis, and it seems like every deal that comes to market is extremely oversubscribed.”

Still, the scarcity is overshadowing the market, and keeping it range bound.

“This lack of supply is keeping us here right now,” the New York trader said, noting that yields remained virtually unchanged across the curve all week albeit with a basis point cut on the long end on Tuesday.

“If we had a more average supply month, the thought is we would be pushing out MMD more and more,” he said. “Once we get to a more normal supply, these rates should really move out more notably on the long end and the intermediate short end should push as well, but just not as much.”

Next week’s New Jersey offering should be attention-grabbing among cash-flush investors, traders said.

“The New Jersey deal should do very well, particularly if people remember how the New Jersey GO deal did,” he said, referring to the near $4 billion COVID-19 emergency bond deal in November. “I would expect high demand again.”

The state last sold GO bonds in November, when the deal was priced a day earlier due to strong investor interest, despite being downgraded to BBB-plus from A-minus by Standard & Poor’s Global Ratings. The total interest cost of the tax-exempt bonds was just under 2%.

Next week, the larger series of the New Jersey turnpike deal consists of a $953 million taxable series expected to be priced by Citigroup Global Markets on Thursday with a structure of serials from 2023 to 2036 and a term bond in 2040.

In addition, Goldman, Sachs & Co. is expected to price a $502.5 million tax-exempt series for the authority also on Thursday.

Both series are rated A2 by Moody’s Investors Service, A-plus by Standard & Poor’s, and A by Fitch Ratings.

“I expect there will be strong demand for the N.J. turnpike deal next week, considering there will be a little spread in the deal relative to high-grade deals and the new administration’s willingness to help out states most affected by the pandemic,” he said.

Other large taxable offerings include a $450 million deal from the AHS Hospital Corp. which will be priced by Goldman, Sachs & Co. on Wednesday. The bonds are rated Aa3 by Moody’s, and AA-minus by Standard & Poor’s.

UBS Securities LLC, meanwhile, will price a $311 million taxable, corporate CUSIP refunding on behalf of the J. Paul Getty Trust in a deal structured as a single serial maturity in 2024. The bonds are triple-A rated by Moody’s and Standard & Poor’s.

The deal, which is rated triple-A by Moody’s and AA-plus by Standard & Poor’s is structured as serials between 2023 and 2039 with a term bond in 2043 and will be priced by Morgan Stanley & Co. on Thursday.

A $300 million taxable corporate CUSIP deal is also on tap from The California Endowment on Tuesday. JPMorgan Securities will price the offering on Tuesday. The social bonds are rated triple-A by both Moody’s and Standard & Poor’s.

Secondary market
The secondary market continues to be impacted by the supply shortage and the political landscape, New York traders said.

“There was a tough secondary market this week in terms of trying to find decent paper with value,” one New York trader said.

“There continues to be a lot of cash around, so trading is pretty light,” the second trader said, adding that investors are awaiting next week’s over $6 billion of new issuance to whet their appetites.