Joe Biden will sign a barrage of executive orders on Wednesday as he aims to use his first afternoon as US president to reverse some of Donald Trump’s most controversial policies in areas ranging from climate change to immigration.

Mr Biden will use his inaugural address from the US Capitol, which is under heavy military protection after the January 6 attack, to ask Americans to unite as they face the twin crises of Covid-19 and a bruising economic downturn, according to his advisers.

His conciliatory message is intended to mark a sharp contrast with the divisive rhetoric that defined Mr Trump’s four years in office, which culminated in a mob of his supporters launching the assault on the seat of US democracy.

On the global front, Mr Biden will signal that the US intends to rejoin the Paris climate accord and halt its withdrawal from the World Health Organization.

Among the 15 executive orders released on Wednesday morning was a “100-day masking challenge” to promote the wearing of face masks. Anthony Fauci, the US health official who was often at odds with Mr Trump over the coronavirus response, will participate in this week’s executive board meeting at the WHO as head of the US delegation.

In addition, Mr Biden will stop the construction of the border wall in Mexico that was championed by his predecessor. He will also roll back the travel ban on citizens of certain Muslim countries introduced at the very beginning of Mr Trump’s administration.

“It was rooted in xenophobia and religious animus and president-elect Biden has been clear that we will not turn our back on our values with discriminatory bans on entry to the United States,” Jake Sullivan, the incoming national security adviser, said of the Muslim ban in a briefing with reporters.

Mr Biden also plans to move to reverse some of the environmental deregulation pursued by Mr Trump, and introduce a mask mandate lasting 100 days on federal property to try to curb coronavirus infections.

The new president aims to rescind the permit for the Keystone XL pipeline connecting the US with Canada. “Its construction was not consistent with addressing the climate crisis to the depth and scope that we are planning to address it,” said Gina McCarthy, the incoming White House climate tsar.

Ms McCarthy said the Biden administration would place a temporary moratorium on all oil and natural gas leasing activities in the Arctic National Wildlife Refuge.

On the economic front, Mr Biden will ask US government agencies to consider extending moratoriums on evictions and foreclosures, and extending the pause on interest and principal payments for federal student loans.

In terms of racial justice, Mr Biden will rescind Mr Trump’s “1776 commission”, which was set up by the outgoing president to “restore patriotic education to our schools” and was criticised for seeking to erase the history of racism in America. 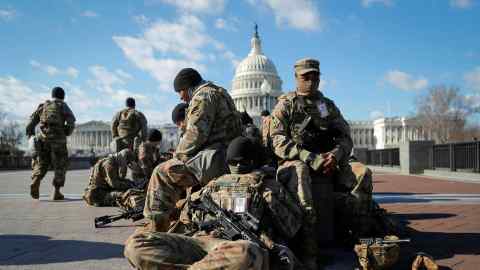 Mr Biden’s inaugural speech is expected to last between 20 and 30 minutes, according to people briefed on the address.

In a break with the norms of transferring power, Mr Trump will not welcome Mr Biden at the White House and will instead head to his Mar-a-Lago resort in Florida on Wednesday without attending the inauguration.

“What you can expect to hear from . . . the president once he’s sworn in, is a call for unity and bringing the country together,” said Jen Psaki, the incoming White House press secretary. “It will be a forward-looking speech,” she told reporters.

Mr Biden arrived in Washington on Tuesday afternoon from his hometown of Wilmington, Delaware, to attend a memorial service for coronavirus victims at the Lincoln Memorial’s reflecting pool. “To heal, we must remember,” he said in brief remarks. “It is important to do that as a nation,” he added.

At 78, Mr Biden will be the oldest incoming president in US history, and faces a huge task in rebuilding the country’s morale. According to an NBC News poll released on Tuesday, 73 per cent of voters say America is on the wrong track, and 53 per cent say they are worried and pessimistic about the nation’s future.

After a historic 2020 election, stay on top of the biggest themes driving US politics, business and markets from Washington, New York and beyond with Rana Foroohar and Edward Luce. Sign up here