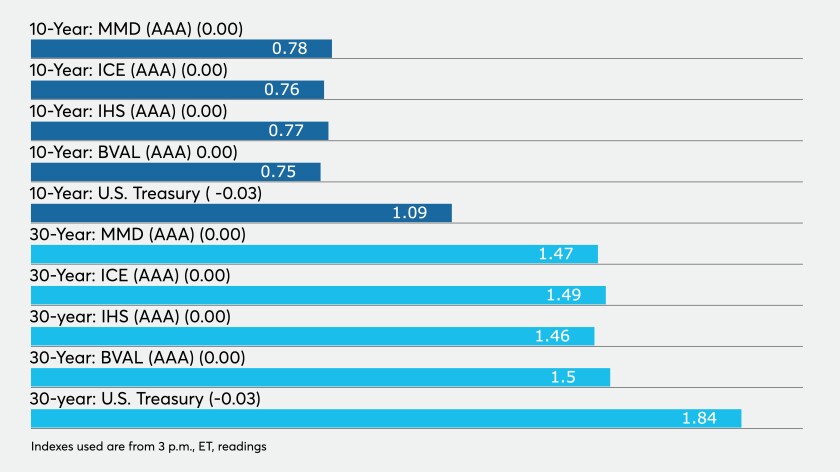 Quiet and unchanged is how municipal traders described the municipal market on Tuesday, as Treasury yields rose slightly and the week got underway ahead of Wednesday’s inauguration.

“There is a lot of cash in the market,” a New York trader said, pointing to two key deals this week in the primary market, which is expected to see the arrival of an estimated $6.01 billion according to Ipreo and The Bond Buyer, up from total sales of $3.78 billion this week.

The largest negotiated deal is a combined $1.5 billion taxable and tax-exempt refunding from the New Jersey Turnpike Authority.

The deal should be highly sought after by investors eager for supply, according to the trader.

The New Jersey turnpike deal consists of a $953 million taxable series expected to be priced by Citigroup Global Markets on Thursday with a structure of serials from 2023 to 2036 and a term bond in 2040.

In addition, Goldman, Sachs & Co. is expected to price a smaller, $502.5 million tax-exempt series for the authority also on Thursday. Both series are rated A2 by Moody’s Investors Service, A-plus by Standard & Poor’s, and A by Fitch Ratings.

Indeed, tax-exempt performance is dependent on what supply looks like versus taxables. The 30-day visible supply has more than 30% taxable.

Demand will increase and exceed the growing demand expected for 2021, despite some the presence of continued low interest rates and some volatility, according to Peter Hayes, head of the Municipal Bonds Group and Sean Carney, head of municipal strategy at BlackRock Inc. wrote in a 2021 municipal market outlook on Jan. 19.

“While interest rates are set to remain broadly low, we expect a further increase when economic activity returns to normal,” the analysts wrote.

Historically low interest rates create a favorable environment for issuing debt, they noted. The pair said municipals tend to outperform Treasuries when rates rise, retaining the appeal of the asset class even for investors holding the most skeptical views on yields.

“Despite higher volatility in rates, flows and issuance, we expect demand for municipals to remain durable and continue to outpace elevated supply in 2021,” they said. “We anticipate low- to mid-single-digit returns for the asset class, with notable contributions from the high-yield sector — both in terms of income generation and outperformance versus investment grade.” 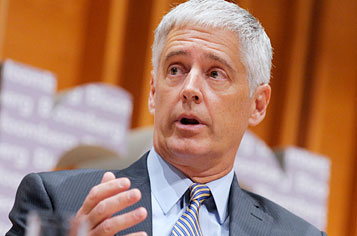 “Supply is likely to remain elevated this year, albeit not to the extent believed prior to the Georgia runoff elections,” Hayes and Carney said in the report. The pair anticipates annual issuance in the range of $450 billion to $475 billion.

Aside from the amount of issuance, the underlying composition is important, Hayes and Carney said. “Taxable municipals, which had historically represented a very small portion of total muni issuance, have become a meaningful contingent since the ability for issuers to advance refund their debt via tax-exempt issuance was eliminated as part of the tax reform in 2017,” they said.

The probability of the new administration restoring the advance refunding exemption will have a large influence on the amount of taxable municipal debt issued this year, the added.

However, the pair pointed out that under current tax law, they project taxable bonds constituting 30% of municipal issuance in 2021.

Muni CUSIP requests rise
The aggregate total of all municipal securities — bonds, long-term and short-term notes, and commercial paper — rose 12.6% in December versus November totals, according to CUSIP Global Services. On an annualized basis, municipal CUSIP identifier request volumes are up 10.1% through December and for municipal bonds specifically, requests rose 15.1 % month-over-month, and 12.4% for all of 2020.

CUSIP identifier requests for the broad category of U.S. and Canadian corporate equity and debt totaled 4,177 in December, up 6.4% from November. On a year-over-year basis, corporate CUSIP requests are up 6.9%. The December 2020 monthly volume increase was focused in U.S. corporate equity, which climbed 24.0% versus November 2020 totals

“While it has clearly not been a straight path to this point, overall CUSIP request volume across nearly every major asset class ended 2020 considerably higher than last year,” said Gerard Faulkner, director of operations for CGS. “Month-to-month results showed significant volatility throughout the year, but when the dust settled, we ended the year with a 10% increase in municipal request volume and a 7% increase in corporate request volumes, which is a real testament to the efficiency of our financial markets during a period of extreme uncertainty.”

Biden rescue plan
The Biden rescue plan would have a ”dramatic” impact on the economy “because of its size and the speed with which it is likely to be implemented,” according to David Kelly, chief global strategist, JPMorgan Funds.

“The Biden rescue plan could boost nominal GDP growth to 11.4% year-over-year by the end of this year — most of which would come in the form of stronger real GDP growth, although it would likely also result in higher prices, as hyped-up demand confronted a limited supply of services,” he said. “This could push consumption deflator inflation above the Fed’s 2% target and cut the unemployment rate to below 5% by the end of the year.”

And the chances of passage are high, according to Morgan Stanley, since moderate members of Congress back spending for stimulus and infrastructure, although they have not supported making changes to taxes.

Of course, all this matters in determining what the Federal Reserve will do. Federal Reserve Bank of Atlanta President Raphael Bostic early last week said he’d be opening to “tapering” later this year should the economy perform well. But other Fed officials, most notably Board Chair Jerome Powell dismissed the possibility of a tapering this year.

BCA Research advises “to not get caught up in the different tones of Fed speakers. The Fed has already been very explicit about the economic criteria that will cause it to tighten policy. Any evaluation of when tightening will occur should be based on an assessment of the economic data relative to these criteria, not on whether certain Fed officials sound more or less optimistic about the future.”

And when the Fed decides to taper its asset purchases, don’t expect taper tantrum, said Morgan Stanley’s Guneet Dhingra. Three reasons there won’t be one, he wrote in a report: “First, the Fed’s high degree of optionality on the size and composition of quantitative easing reduces the risk of a spike in yields. Second, the December FOMC minutes indicate that the Fed plans a long lead time between communicating its intentions and actually tapering. This contrasts with 2013, where the plan to taper came as a surprise and its implementation seemed imminent.”

“Finally, the market differentiates tapering from tightening, which limits the risk of another tantrum,” Dhingra wrote. “In 2013, the Fed was unable to separate tapering and tightening (via higher rates). Rate expectations (which capture the pricing of rate hikes) and term premiums (which capture the pricing of QE) were positively correlated from 2009 to 2013, suggesting that the market had been conditioned to treat rate hikes and QE as two sides of the same coin. In contrast, rate expectations and term premiums have completely decoupled in the past nine months, suggesting that the market won’t make the same mistake this time.”

Separately, the Institute for Supply Management semi-annual economic forecast sees manufacturing revenues growing 6.9% this year after a 1.3% slip in 2020, with capital expenditures growing 2.4%.

Also released Tuesday, the Chicago Business Barometer was revised to 58.7 in December from the 59.5 initially reported, based on revisions to the seasonal adjustment.

“In aggregate, the Barometer was revised lower by 0.1 point in 2020,” according to a release. “Growth was revised down in Q4, while it was revised up in Q2.” The other quarters were unchanged.

Finally, the Federal Reserve Bank of New York’s Business Leaders survey showed service sector activity in the region “declined at an accelerated pace,” with the business activity index dropping to negative 31.8 in January from negative 26.9 in December.

However, the forward looking business activity index jumped to 21.6 in January from 4.7 in December, while the future business climate index rose to 16.7 from zero.