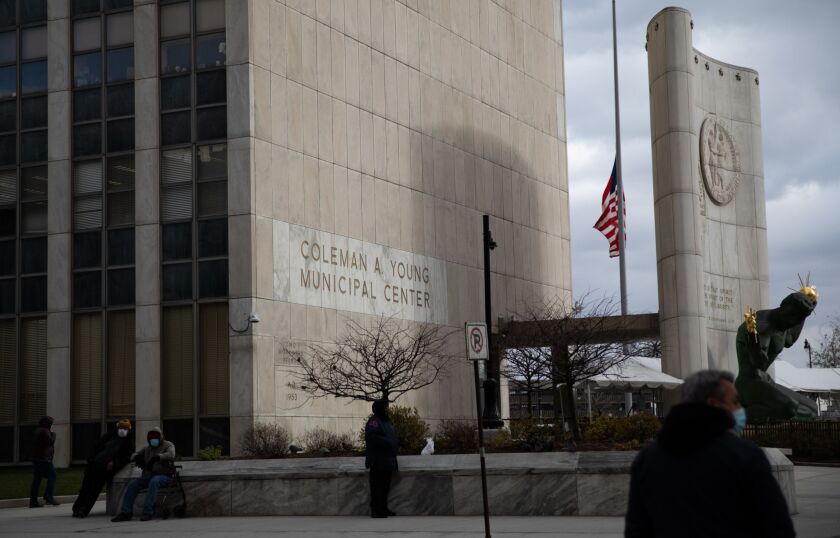 Detroit heads into the bond market in early February with a rating outlook boost as the speculative-grade city makes the case that it is capably managing the fiscal blows of the COVID-19 pandemic.

“Despite the extreme pressures of the pandemic, Detroit’s ability to meet obligations has not wavered, and we expect this will hold true over at least the next year,” said S&P analyst John Sauter. The agency had cut its outlook to negative in April because of the pandemic.

Moody’s Investors Service affirmed its Ba3 rating and positive outlook Tuesday on $380 million of debt including the upcoming sale.

The city has won a series of upgrades since emerging from Chapter 9 but its ratings remain firmly in junk territory at three levels below an investment grade.

Both series will carry a “social bond” designation based on the use of proceeds, through the city’s self-designation in alignment with the core components of ICMA’s Social Bond Principles.

. The sale is the city’s third stand-alone transaction without a state backup or intercept since it exited from Chapter 9 in late 2014. BofA Securities and Siebert Williams Shank & Co. LLC will lead the deal.

After the coronavirus hit, Detroit needed to act fast to erase $430 million of revenue losses.

The city used federal grants and aid, cut spending, and tapped some reserves but they remain at healthy levels and their maintenance eased S&P’s prior concerns as they give the city flexibility to absorb a potentially slower revenue recovery and prepare for looming pension payments.

“The positive outlook reflects the city’s early and significant response to revenue declines. The city’s rating is likely to move upward if it emerges from the recession with only a modest draw on reserves and moderate increases in debt,” Moody’s said.

“The return to a stable outlook reflects the city’s strong fiscal management during the COVID-19 pandemic,” the city’s acting chief financial officer, Jay Rising, said in a statement.

The new Biden administration and Democratic control of Congress that bolsters prospects for local government and state relief also should provide tailwinds, said market participants. Michigan’s latest revenue estimating conference that showed revenues are doing better than previously forecast eases worries over the need for cuts that could trickle down to local governments.

The city’s blight plans is a positive for the city’s economic prospects.

“We view the passage as significant in that in will further a key component of the administration’s long-term vision for strengthening the tax base and do so with a dedicated debt millage as opposed to funding through reserves or the operating budget,” S&P said.

After the sale, the city, the 23rd largest in the country with a population of 670,000 will have $1.7 billion of unlimited- and limited-tax GO debt.

The city expects a drawdown of reserves for fiscal 2021 but a more modest one than previously expected. The city is currently working to craft a fiscal 2022 budget for release in March that will address 2021 shortfalls. The city closed the books on its $1.25 billion fiscal 2020 budget June 30 with a $746 million fund balance including an unassigned balance of $109 million. The city will use $20 million of the unassigned balance to offset pandemic-related revenue losses and $30 million going to the special retiree fund.

Pressures abound as the city’s economic recovery is tied to the pandemic’s course and vaccine rollout and will depend on job growth, how soon remote workers come back downtown and when casinos and restaurants are fully reopened.

Post-pandemic, pensions remain the city’s most pressing fiscal strain. The city’s 2014 plan of adjustment gave the city breathing room with help from the state and private entities until 2024 when an estimated $170 million payment is owed. The city has built up $185 million in a Retiree Protection Fund to offset the impact on the operating budget and it’s expected to reach $355 million by 2024.

The bankruptcy process gave unsecured bondholders and insurers recoveries between 41 cents and 74 cents on the dollar, but the city has easily found buyers for its last two rounds of unenhanced borrowing at steep spread penalties.

The city received $780 million in orders from 30 institutional investors for its $80 million sale in October. Spreads widened from a 2018 sale to levels that traders said were in line with the market despite the rating improvements. The 10-year maturity with a 5% coupon settled at a 3.75% rate, a spread of 280 basis points to the Municipal Market Data’s AAA benchmark, compared to a 202 bp spread in 2018 on the comparable maturity.