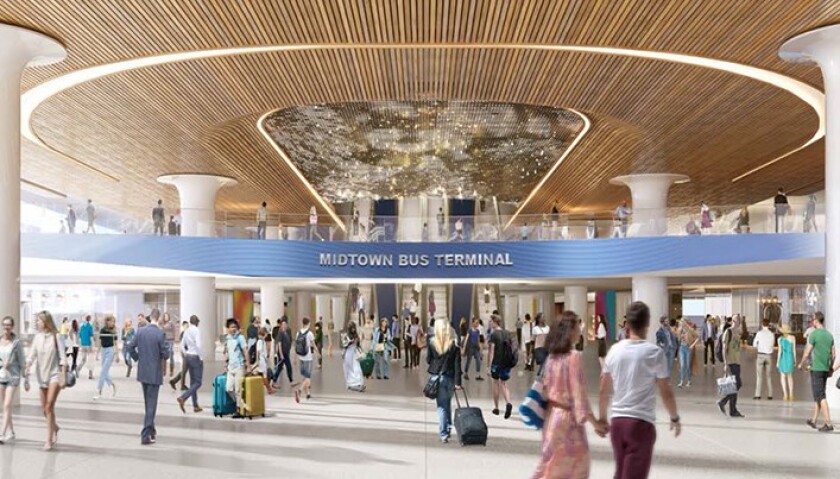 The Port Authority of New York and New Jersey’s plans for a new Manhattan bus terminal — a trophy project involving a long-scorned facility and stigmatized mode of travel — beg the question of who will pay for it and how much.

While some media accounts pegged at the cost at up to $10 billion, Executive Director Rick Cotton sidestepped estimates on Thursday as the 100-year-old bistate authority released its final scoping report.

“We don’t want to quote an amount that’s too high or too low,” he said. “We want to wait until we get greater clarity on each of the elements. If we put a number out there, we want to stand behind it.”

The Port Authority submitted the report to the Federal Transit Administration with a request for an environmental review. Full construction could take up to a decade.

It is hinging its build-in-place project on a four-pronged approach that would include air-rights proceeds up to four new high-rise towers — three office and one residential — and funding from payments-in-lieu of taxes, or PILOTs, from developers subject to city approval.

The Port Authority, which started the process in 2013, winnowed 30 options to the preferred one it unveiled Thursday. The authority intends to tap $3 billion from its 2017 to 2026 capital program and seek financial assistance from new or existing federal infrastructure programs.

“This was the structure for funding the Moynihan Train Hall,” Cotton said.

The agency is looking for a clearer picture of both the real-estate market for Manhattan’s West Side and funding prospects under the Biden administration. While it projects 30% bus ridership expansion through 2040, the fluid dynamics of COVID-19 commuter trends could change that.

The agency is looking for a clearer picture of both the real-estate market for Manhattan’s West Side and funding prospects under the Biden administration. While it projects 30% bus ridership expansion through 2040, the fluid dynamics of COVID-19 commuter trends could change that.

The Port Authority, one of the largest municipal issuers, priced $868 million of revenue bonds last week.

It opened the bus terminal in 1950 after a two-year construction that cost $24 million. It renovated into its current form in 1981. It serves many New Jersey commuters plus 12 New York City Transit subway lines.

It is also one of the most reviled pieces of New York infrastructure. Television comedian John Oliver called it the single worst place on Earth.

“That kind of scorn is not underserved,” Cotton said.

The new project would add off-street staging and storage facility and capacity for intercity buses that now drop off and load to city streets. And, in a nod to community groups, it would add up to three acres of greenspace and involve no takeover of private property.

Tom Wright, president of think tank Regional Plan Association, called it “one of the highest infrastructure priorities for our region.”

Port Authority intends to build a storage area on its property and use it as secondary space during reconstruction of the existing terminal, which Wright called “a creative approach to a complicated problem.”