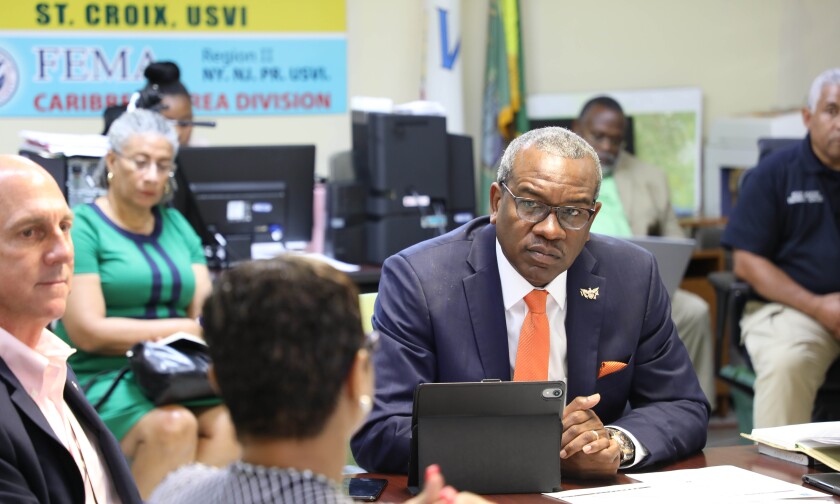 Bryan addressed these and other financial topics in his annual state of the territory speech Tuesday evening.

The Virgin Islands government has about $3.35 billion of net pension liabilities.

“Last year, the Government Employees Retirement System sold off about $120 million in assets,” Bryan said. “There is now less than $455 million remaining in the portfolio. This year we will likely sell off even more. The system is in an accelerating death spiral. And for every day that goes by without taking definitive action to reverse the failing of the Government Retirement System, the decisions that ultimately need to be made become more painful and more costly.

“We all know this,” Bryan said. “We should also know that if the pension system fails it will affect far more than just the annuities of the retirees; the entire Virgin Islands economy will suffer the loss of over $200 million annually.”

Bryan said last year the Senate had three times rejected his proposal for refinancing the islands’ matching funds bonds, which would have partially addressed the pension system underfunding.

“Every day that we wait, it costs the GERS $329,000 and the system moves steadily towards insolvency,” Bryan said.

“We have some additional solutions we will present to the Senate this year,” Bryan said. “But none of these will be as straightforward or as immediate as the refunding of the Internal Revenue Matching Fund bonds would have been.”

The governor’s communications director, Richard Motta, Jr. said, “The additional solutions the governor is referring to is the use of tax revenue from his proposed adult use of cannabis legislation [and] additional excise tax revenue generated from increased rum production.

“Part of the governor’s plan to infuse additional revenue into the pension system is to attract small boutique distillers to add to our rum production portfolio to increase excise rum revenue to the territory,” Motta continued. “The administration is currently in talks with several companies and is actively pursuing a promising lead.

The Limetree Bay oil refinery in St. Croix hasn’t refined oil since 2012. It’s closing was a major trigger for the islands’ economic and government revenue problems over the last 10 years. Bryan said that the site was nearing restarting refining and that once this happened the government would get $7 million a year in tax revenue.

“The governor is also looking to revenue from refinery operations at Limetree Bay once the refinery starts exporting product,” Motta said. “Lastly, the governor is also referring to utilizing a portion of the excise tax once [a] court case is resolved and the territory is again allowed to collect those taxes.”

In the past Bryan said that the territory’s Water and Power Authority is the other government financial problem that keeps him awake at night. On this he offered some concrete good news.

He said that the authority had a contract with Wartsila for the latter to construct four new power generators and a battery storage system at a St. Thomas power plant. These should be “onsite” by June, he said.

The new facilities will increase the reliability of the power plant and lower its fuel and maintenance costs, he said. The federal government is providing all of the funding for the new facilities. The islands have been plagued by frequent power outages for a few years.

On his government’s current financial state he offered a mixed report. Fiscal year 2020, which ran through the end of September 2020, was better by all financial measures over fiscal year 2019.