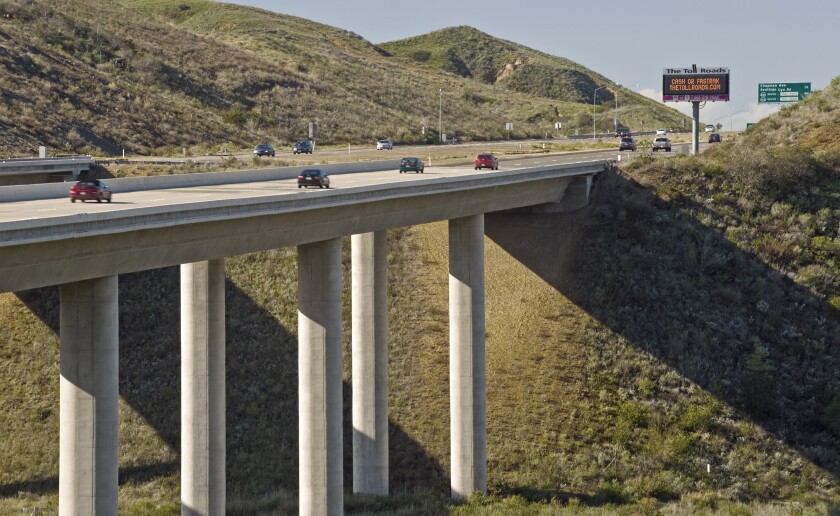 The Foothill-Eastern Transportation Corridor Agency received so much interest in a tender offering that it eliminated the need for the vast majority of a planned open-market refunding bond deal.

“We were so successful with the tender and exchange that we ended up issuing fewer bonds,” said Amy Potter, chief financial officer for the California toll agency.

What could have been a close to $785 million combined taxable and tax exempt market pricing was reduced to $53 million in tax-exempt debt priced Tuesday by lead manager Goldman Sachs. The tax-exempt debt was split between a $37.5 million senior lien toll refunding and a $15.5 million junior lien refunding.

Foothill-Eastern, which manages 36 miles of toll roads in Orange County, exchanged $519.2 million of the $692 million in debt it had planned to refund. The tender offer closed last week.

The tender allowed holders of tax-exempt paper to exchange it for new tax-exempts; the maturities, which had not reached their call date, would have otherwise been refunded with taxable debt because of the 2017 tax law barring advance refundings.

“I was very pleased with 77% of the transaction being a tender and exchange,” Potter said. “I was pleased the majority of it was an exchange, because that really speaks to investor confidence in our credit. They know our credit, like it, and want to hold on to those bonds.”

The tender offer was an attempt to tap into unfilled demand for tax-exempt debt, with so much being refunded these days with taxable bonds, Potter said, adding the agency “listens to investors.”

Foothill-Eastern exceeded its $100 million net present value target on the hybrid transaction, achieving $154 million, Potter said. It frontloaded savings achieving $13 million in savings in each year from 2022 through 2025, she said.

Foothill-Eastern had been hearing from investors that they wanted to hang on to tax-exempt debt after so much of it had been refunded into taxable debt.

Morgan Stanley said in a report Monday that it expects to see $220 billion in taxable muni issuance in 2021, and about 80% of that will be driven by advance refundings.

The math works as long as taxable interest rates remain lower than what the tax-exempt rates were for the bonds being refunded.

“Notably, this number could vary greatly and potentially increase substantially if U.S. Treasury yields remain lower than our forecast and/or issuers are willing to pursue refundings at lower present value savings than the 10% hurdles we have assumed,” Morgan Stanley analysts wrote.

Though Morgan Stanley made the assessment under the heading “momentum for taxable supply is expected to continue into 2021,” that volume would actually be down from last year, according to the bank’s chart, which showed volume surpassing $230 billion in 2020.

Taxable volume may go down, the bank’s analysts wrote, because the ability to advance refund tax-exempt debt could be restored in a Biden administration infrastructure bill by October. The analysts predicted that the change wouldn’t come through a bill focused on the financial mechanism, but that it would be included in a larger infrastructure bill.

Issuers aren’t holding their breath on a reboot of advance refundings and some financial advisors that tracked F-ECTA’s deal told Potter she could be hearing from other issuers asking her for details on how the toll road agency pulled off its hybrid transaction.

In addition to the mountain of debt taken out through advance refundings in 2020, Brothers said that there is traditionally a dearth of new muni bond issuance from Thanksgiving through the first two weeks of every year.

“The muni market is suffering from a lack of supply, because taxables are crowding out tax-exempt,” Brothers said. “We have big inflows occurring, and then a lack of supply.”

The lack of supply has made munis “historically rich, and our market is shrinking every year, because we have bonds rolling off and the net issuance has been shrinking,” Brothers said.

Bel Air did not hold any of the existing F-ECTA debt, but considered the new deal before passing because the maturities offered didn’t match its current sweet spot. Bel Air is currently targeting shorter maturities, and the first year on the F-ECTA deal was 2026, which is right at five years, Brothers said.

“We passed on the deal, not on the credit,” Brothers said. “The structure wasn’t great for us, because we are bearish on the market.”

Bel Air is comfortable buying taxable muni debt, Brothers said. It just doesn’t care for all the competition coming from what are typically not muni buyers.

Risk-adjusted muni taxable debt is more attractive than corporate, Brothers said, and it’s an arena the firm knows well. But competition from European buyers has driven up the prices on muni taxable debt.

“There are too many buyers,” Brothers said. “The U.S. is the only place you can find positive yield across every product, and taxable munis are the place where non-U.S., and non muni buyers come into the market.”

Issuers are finding they can structure a deal that is longer weighted because investors in Europe are looking for deals with longer maturities, he said.

“We are fine seeing more taxable muni issuance,” Brothers said. “We don’t like that it’s being crowded out by non-traditional muni buyers, who are making it more expensive.”

Even so, he would like to the federal government overturn the restriction on tax exempt advance refundings.

“It would be better for everyone in the market if they decide to rescind the 2017 tax act,” Brothers said.