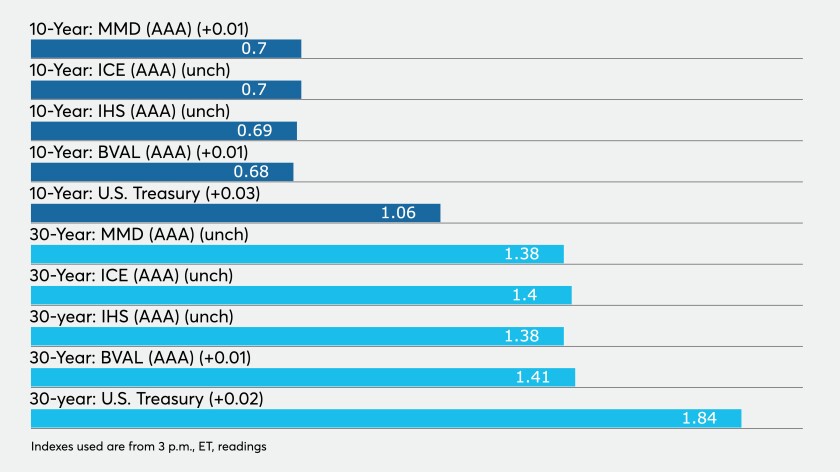 Municipal secondary activity was quiet Friday but weakness in U.S. Treasuries and an unsettled equities market led to small cuts to triple-A benchmarks around the five- to 10-year part of the curve.

About $7.44 billion of issuance is expected for the first week of February, up from the $5.95 billion issued the last week of January, but still below average. January volume fell 26.7% as issuers contemplate budget decisions amid the pandemic.

The mixture of tax-exempt and taxable issuance — keeping with the recent increases in taxables, several large deals are expected the first two weeks of the month — should help keep muni levels steady if a bigger UST adjustment takes place.

It is most certainly an issuers’ market as rates are low, credit spreads continue to tighten, money pours into municipal bond mutual funds at record levels and a net negative supply sits at more than $11 billion.

“The economy slowed and lost some ground as we closed out 2020,” said Diane Swonk, chief economist at Grant Thornton. “The first quarter is poised to be even weaker. Technically, some will argue we are in a recovery, but this is a setback and the hole that COVID dug is still large. The data also reveal just how critical aid is in sustaining even modest growth given the course of the virus and progress in the pace of vaccinations. (We are still chasing instead of front running a virus that is mutating.)”

However, Mickey Levy and Roiana Reid of Berenberg expect sizable stimulus will pump the economy, and expect gross domestic product for 2021 to expand at a 6.5% rate, better than the consensus forecast.

“Ending the pandemic remains the critical issue,” they note. “We continue to assume that the distribution and administration of the vaccines will be successful and unleash an unprecedented amount of fiscal and monetary stimulus, excess personal saving, and pent-up demand. More stimulus adds more fuel, and more debt.”

Consumers retrenched for a second consecutive month in December as the coronavirus continued to pummel the nation.

Personal consumption fell 0.2% in December after a revised 0.7% drop a month earlier, originally reported as a 1.1% decline.

Economists polled by IFR Markets expected a 0.4% slide in December.

And the University of Michigan’s consumer sentiment index confirmed consumers are still not ready to resume normal activities. The index fell to 79.0 in January from 80.7 in December and 99.8 in January 2020.

Economists expected the index to hold at the 79.2 level posted mid-month.

Separately, the employment cost index rose 0.7% in the fourth quarter, larger than the 0.5% rise expected by economists.

Also released pending home sales fell 0.3% in December after a 2,5% decline in November. Economists expected a 0.6% drop. This was the fourth month in a row pending sales declined, and this drop was led by a decrease in the Midwest.

The Chicago Business Barometer surged to 63.8 in January, its top level since July 2018, from a downwardly revised 58.7 in December, initially reported as 59.5.

“Among the main five indicators, production saw the largest monthly gain, followed by new orders. Employment recorded the biggest decline,” according to a release.

Also released Friday, the Federal Reserve Bank of Chicago’s Midwest Economy Index decreased to 1.26 in December from 1.83 in November, while the relative MEI slipped to 1.58 from 1.91 in November, suggesting the regional economy is performing better than normal.

The Tarrant Regional Water District, Texas, (/AAA//) is set to sell $299.4 million of taxable revenue bonds by competitive bid at 11 a.m. on Tuesday.