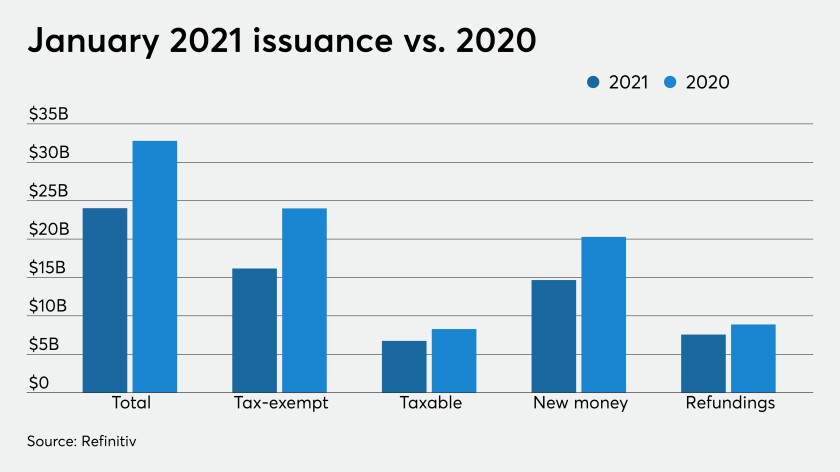 Municipal volume in January fell year-over-year as issuers hit the pause button while contemplating COVID-19 effects on their budgets and the potential for direct aid from Washington.

“There are obviously a lot of distractions in the market and issuers right now are probably most interested in navigating the current fiscal year budget to the end of this year,” said Pat Luby, municipal strategist at CreditSights. “In that regard, though, it doesn’t surprise me that refundings declined by less than new-money financings.”

January and February typically are the lightest months for issuance, but the massive fourth quarter 2020 issuance contributed to the quieter start to the year.

“I was and still am expecting issuance to be relatively lower in the first quarter this year because so much issuance was crammed into the market before the 2020 elections” said Tom Kozlik, head of strategy and credit at Hilltop Securities. “There was a multi-month ramp-up that began as early as August 2020 because issuers and buyers were concerned about the period just before and after the elections.”

Kozlik said there should be some caution, though, depending on how the pandemic, vaccine distribution and variant spread continues to unfold.

“Something that I did not even consider in October and November 2020 when I published our 2021 issuance forecast was a potential downside with regard to the spread of the virus and a slow roll out of vaccines,” he said. “COVID-19 numbers have come down slightly since the beginning of January, but they are still extraordinarily high. What if they stay relatively high for several months and what if the vaccine distribution goes much slower than hoped? This could dampen enthusiasm to add debt to balance sheets unless there is fiscal relief.”

The scope and size of any stimulus package or direct aid from Washington also hangs over the heads of many participants.

Issuance could rise on news of direct, unencumbered fiscal relief for state and local governments. This could occur in another phase of a COVID-19 package from D.C.

“I think there is definitely an upside scenario that would increase issuers’ desire to sell more debt if they receive fiscal relief. Remember, states and cities have still not received any (that is zero) dollars of direct, unencumbered relief,” Kozlik said. “There are budget shortfalls and there is also the potential for them to worsen as the spread of the virus increases and dampens economic activity.”

“I would expect some issuers to contemplate federal stimulus and an infrastructure package, but I also don’t think that most issuers are going to wait on that if they have a need that they’re looking to fill that’s immediate,” CreditSights’ Luby said. Given “the increased expectation that there might be an infrastructure bill in this Congress, I could see an issuer maybe slowing down some of the infrastructure-related categories. But I would also expect them to continue bringing bonds to the market. If they need to build a school, they’re going to need to access the market. If they need to upgrade a water or sewer plant, they’ll need to tap the market.”

Issuance could also rise mid-year and later in the year if there are infrastructure-related elements, like those from the Moving Forward Act that become law.

“I think relief, and then stimulus potentially in the form of what we saw in the Moving Forward Act would definitely change the volume dynamic for the rest of the year,” Kozlik said. “It depends upon the timing and specifics of the legislation however.”

Sector changes
State issuance in January fell 80.8% to $455.1 million from $2.367 billion in 2020, an unsurprising figure given that states typically ramp up issuance after solidifying budget plans. COVID-19 has amplified the need to plan more cautiously.

The top five issuers from the states were the usual suspects. Texas in first with $3.804 billion, California a close second with $3.440 billion, New York in third with $2.148 billion, New Jersey with $1.982 billion and Pennsylvania in fifth with $1.237 billion.

Part of the reason for the drop can be attributed to the increase in corporate CUSIP deals the sector embraced in 2020, rising 218% in more than $40 billion of deals from 2019’s $12.73 billion, according to IHS Markit data.

The transportation sector which includes airports fell slightly, about 5.5%, to $5.133 billion from $5.431 billion last year.