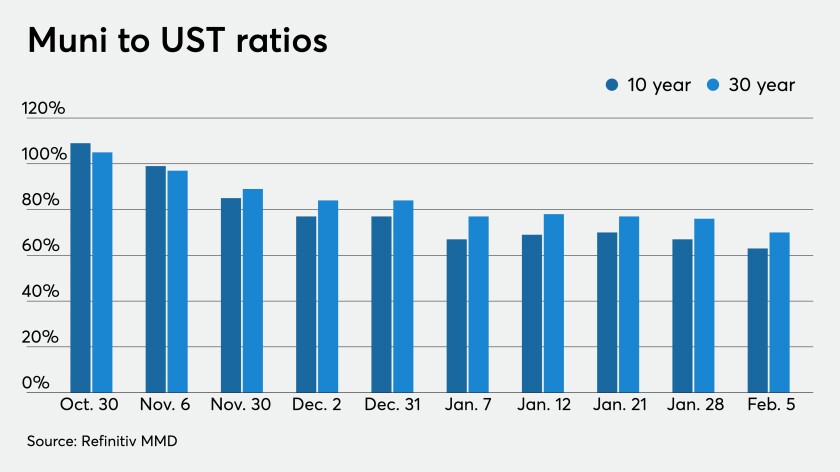 Municipal yields ended the week little changed amid quiet trading, once again ignoring more volatile swings in U.S. Treasuries, with the 30-year there nearing 2.00% at the close Friday.

Stimulus news out of Washington ($1.9 trillion) and disappointing employment numbers — a mere 49,000 nonfarm payrolls gain in January — had equities on the move higher and Treasury yields rising.

Triple-A curves were little changed, with a basis point bump on some shorter maturities.

If how new deals got done this week are any indication, issuers of all stripes should fare well, all else being equal in the municipal space.

With yields at historic lows, investors are clamoring for extra yield, but worried over the economy and market uncertainty. “If you tax adjust a zero percent yield, it is still zero,” the manager said. “It may be prudent to sit on the sidelines and watch a few stories develop until rates increase.”

“Job growth slowed markedly in January, and the previous two months’ revisions were also to the downside,” noted Sameer Samana, senior global market strategist, Wells Fargo Investment Institute. But the news was not all bad. Unemployment and underemployment both declined in the month, he noted, although that could be attributed to the lower participation rate.

“Other internals also indicated that things may not be as bad as the headline suggests with wages and the average workweek both ticking higher,” Samana said. However, the job market “softened in the past few months and the need for fiscal stimulus remains high,” he said.

The key takeaway is “we are still in the grips of the pandemic,” said Marvin Loh, senior global macro strategist at State Street, and until more people get vaccinated, “the employment situation will remain fluid and pressure the continuation of monetary and fiscal stimulus.”

Recent job losses have been short-term and “narrowly based,” said Fitch Chief Economist Brian Coulton, “almost exclusively in the leisure and transport sector.” In his opinion, this shows the broader economy appears “to be adapting and learning to live with the renewed social distancing restrictions imposed at the turn of the year,” which happened in Europe during its second shutdown period. And the result was a lesser hit to gross domestic product.

While those in “pandemic sensitive sectors” have been hard hit, and probably been unable to seek new employment, DWS Group U.S. Economist Christian Scherrmann said those in sectors not so affected by the pandemic had different outcomes. “Those people working in sectors that are not that much affected by the pandemic enjoyed some protection and even some higher work load,” he said. “Be it a slightly longer to do list in the home office or simply jumping in for sick colleagues.”

In the near future, Scherrmann expects those in hard-hit sectors will get some “as pandemic effects are likely to fade.”

Also released Friday, the international trade deficit narrowed to $66.6 billion in December from $69.0 billion in November.

The University of Washington (Aaa/AA+//) is set to price $325 million of taxable and tax-exempt general revenue and refunding bonds on Wednesday. Goldman Sachs & Co. LLC is head underwriter.

The City of Downey, California (/AA//) is set to price $113.7 million of taxable pension obligation bonds on Tuesday. BofA Securities is bookrunner.