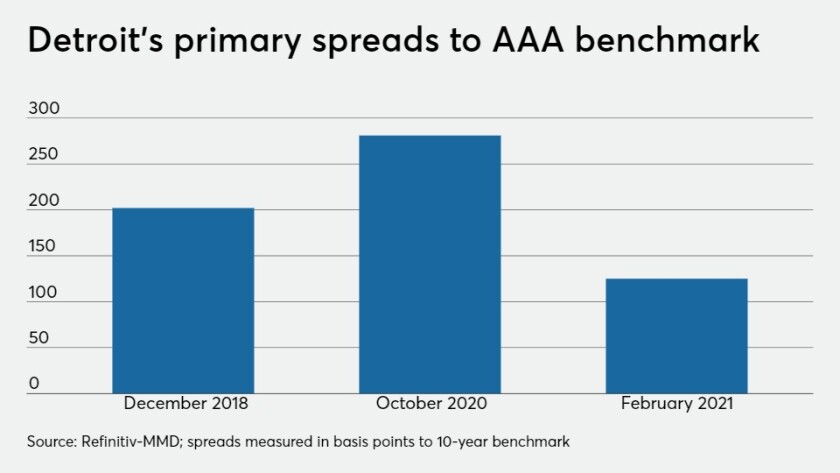 Investors looking for yield pounced on Detroit’s speculative grade paper Thursday, sending the city’s yield penalties to the lowest levels since it imposed losses on bondholders in Chapter 9 bankruptcy.

Spreads were cut by more than half compared to Detroit’s October issue.

More than 60 institutional investors placed orders on the Proposition N bonds that were 20 times oversubscribed, many repeat investors from 2018 and 2020 deals, according to the city’s Chief Financial Officer Jay Rising. The true interest cost was 3.36%. The bonds were marketed with a “social” self-designation based on the use of proceeds.

The deal mostly benefitted from “ongoing inflows into high-yield funds” that were driving spread compression “in notable fashion,” Refinitiv-MMD said in its market close column.

The deal carried ratings of BB-minus with a stable outlook from S&P Global Ratings and Ba3 and a positive outlook from Moody’s Investors Service.

The spreads marked a stark improvement from the city’s $80 million issue in October in its second unenhanced GO issue since emerging from bankruptcy in late 2014.

The city’s first post-bankruptcy GO sale without a state intercept or some enhancement — a $135 million issue in December 2018 — captured narrower spreads than the October sale, which was hurt by the pandemic’s uncertain economic impact.

The city exited Chapter 9 in late 2014 with limited tax bondholders recovering 34 cents on the dollar and unlimited tax holders 74 cents.

Market participants said the city’s management through the pandemic may have helped, but the market’s thirst for high yield paper and compressing spreads really set the tone. Triple-B spreads in 15 years have tightened 38 basis points since the beginning of November 2020.

“I think the response seen in the tax-exempt market” for the Detroit deal “was very much in keeping with what we have seen over the past several weeks with regards to A and BAA credits,” said Greg Saulnier, managing analyst for U.S. municipal bonds at MMD-Refinitiv.

Lipper has reported high-yield muni funds inflows of a “remarkable” $2.4 billion over the past three weeks not including the current week’s numbers “as investors continue to search for yield in this low rate environment that has driven 10yr and 30yr muni/treasury ratios to all-time lows,” Saulnier said Thursday. “I think this lends itself to why the Detroit deal was able to see bumps of 10-30 basis points from this morning’s preliminary levels.”

The Detroit pricing and ability to shave yields resembled the Chicago’s Board of Education’s junk-rated deal the previous week. Underwriters are not coming out with overly aggressive scales, but letting demand drive re-pricings.

Detroit marketed the bonds with the social designation based on its alignment with the core components of International Capital Market Association’s Social Bond Principles. The city said it believes the designation helped bring in orders from institutional buyers attracted to the self-designation who took the time to look deeper into the specifics of the neighborhood improvement project.

In November, more than 70% of voters authorized $250 million of GO borrowing to finance blight removal. Proceeds will help finance the city’s renovation of 8,000 vacant homes and demolish another 8,000. The city will tap the remaining authority next year.

S&P Global Ratings revised Detroit’s outlook to stable from negative in January. “Despite the extreme pressures of the pandemic, Detroit’s ability to meet obligations has not wavered, and we expect this will hold true over at least the next year,” said analyst John Sauter. The agency had cut its outlook to negative in April.

Trading Strategies: Where to Place Your Stop Loss Order
SPACs wipe out half of their value as investors lose appetite for risky growth stocks
Nato to increase forces on high alert to 300,000
Are Oil Stocks Still a Good Buy?
Top 5 cryptocurrencies to watch this week: BTC, UNI, XLM, THETA, HNT