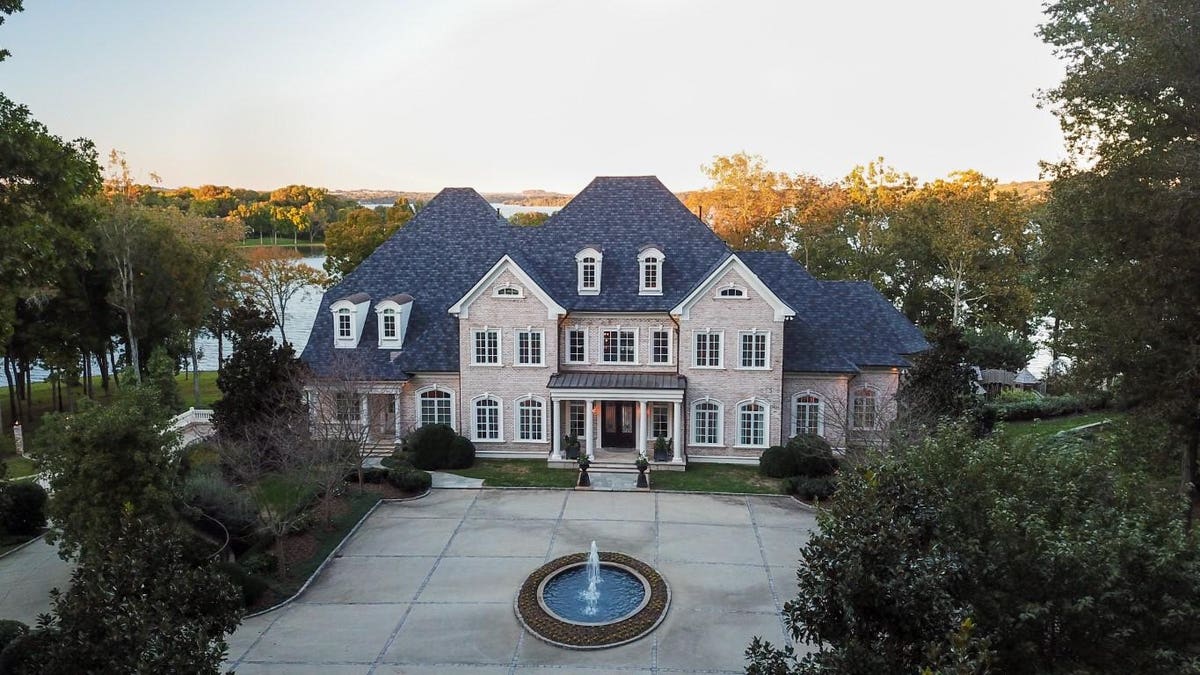 If you’re craving a lakeside retreat, Kelly Clarkson’s Tennessee mansion is on the market again with a newly discounted price tag. With her professional life now centered in Los Angeles, the singer, songwriter and talk show host has reduced the price on her home in the Nashville suburb of Hendersonville from $7.49 million to $6.95 million.

The Voice coach and her ex-husband, Brandon Blackstock, bought the home for $2.86 million in 2012 and completely revamped it. The property, which is adjacent to two wooded acres owned by the Army Corps of Engineers, spans four acres with a gated driveway to the entrance with a center fountain.

Nothing says breezy lakeside atmosphere like the boating distance of almost a hundred river miles to water ski, fish, jet ski, swim or explore the Old Hickory Lake shoreline by boat or one of the Tennessee waterside parks.

With its outward curving shoreline, the water views are exceptional. A two-boat covered boathouse with a lift is near the left property line to maximize the estate’s views of the lake. The exterior also includes an outdoor children’s play area and a pool-spa terrace with a covered pavilion for outdoor dining by a fireplace.

Stunning is an understatement for the foyer that greets guests with a grand staircase. Measuring 20,121 square feet of living space, the home has seven bedrooms and 11 baths. The primary bedroom suite has a seating area in front of a fireplace and a celebrity-worthy bathroom.

In addition to the more formal rooms, theater, game room, gym and two-story office, there is an especially fun entertaining venue: the cowboy bar with saddle-bar stools. Not at all surprising that online furniture retailer Wayfair chose Clarkson as its first official brand ambassador for an exclusive furniture and decor collection inspired by her lifestyle and Southern roots.

Gardens are laid out in the traditional English style, and for the green-thumbed, there is a greenhouse.

Clarkson is living on the West Coast while filming her weekly talk show, The Kelly Clarkson Show, and will continue as a judge on The Voice in 2021. She will be releasing a new album soon with songs inspired by the rise and fall of her relationship.

This year will be an especially active year for Clarkson with an additional star added to her Hollywood Walk of Fame. She also hopes to start her Las Vegas residency that was postponed from 2020 due to coronavirus concerns.

Only a 26-minute drive to downtown Nashville, Hendersonville is well known for its Old Hickory Lake and the beautiful waterfront homes surrounding it that have been drawing Nashville’s music elite since the 1950s.

Hendersonville’s real estate credentials read like a Who’s Who in Country Music. Its 97 miles of shoreline are an idyllic getaway for hard-working musicians to enjoy some down time, whether fishing, boating, visiting marinas, the two campgrounds, the arboretum or docking at the Rudder Restaurant for a lazy Sunday lunch. Many of Nashville’s finest have called Hendersonville home, including Johnny Cash, the Oakridge Boys, Ferlin Husky, Lee Ann Womack and Porter Wagoner.

Clarkson rose to fame in 2002 as the winner of the inaugural season of American Idol, which earned her a record deal with RCA Records. The Texas native was a coach for Season 16 of NBC’s musical competition series The Voice. She is now living near the California studio where she has been busy filming her new weekly talk show, The Kelly Clarkson Show, reports TopTenRealEstateDeals.com.