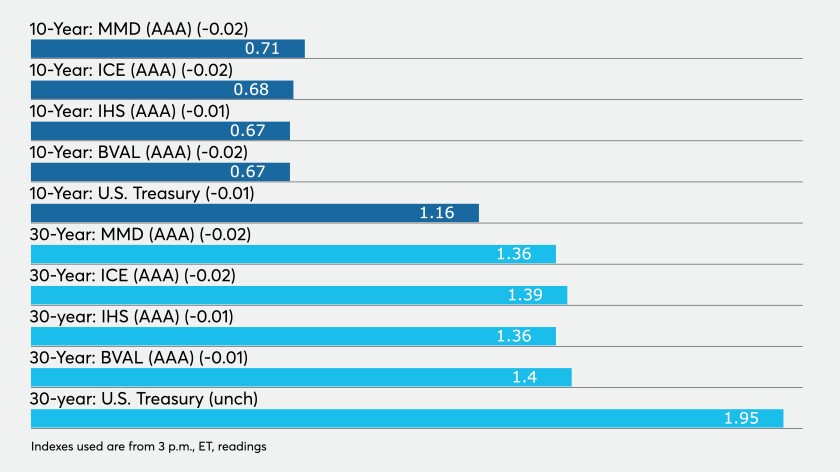 Washington State and the New York Metropolitan Transportation Authority sold bonds in the competitive market to strong bidding, bumping municipal benchmarks lower and moving one- and two-year yields to record lows as investors clamor for paper even with historically rich valuations hanging overhead.

Short municipal yields fell to 0.06% in one year and 0.08% in two years, lower than previous records of 0.08% and 0.09% in August 2020, according to reads of Refinitiv MMD. Triple-A benchmarks were bumped two basis points across the curve, according to MMD.

With the 30-year Treasury currently trading around 1.95%, even if there was some hesitation in the past two sessions to accept lower municipal yields given rich valuations, municipals continue grinding lower. New issues pushed the secondary lower.

“For example, NY MTA 4% coupons in the longer part of the curve were trading at or behind +100 basis points last week and with the ongoing search for yield (in addition to increased stimulus hopes and vaccine rollout) they priced today at +84/+86 bps,” said Greg Saulnier, managing analyst at Refinitiv MMD. “Likewise, the Washington GO was able to sell over $850 million of bonds into the market at or through current secondary trading levels, also indicating a strong response from the market given the deal size.”

Strong technicals helped maintain a solid footing on Tuesday where robust demand from both direct and fund purchases continues year to date, according to Chris Brigati, managing director of municipal investments at Valley National Bancorp.

“The cyclical strength the market usually experiences in January arrived right on schedule this year, and does not appear to be showing any signs of slowing down,” Brigati said.

The strength he is observing in the new-issue market is leading to strong performance in the secondary.

“Most new-issue order periods are oversubscribed given the strong demand for paper, resulting in lower yields and tighter spreads upon final pricing,” he said.

The supply of secondary market paper is limited as investors are seeking yield paper further out on the credit spectrum to gain higher rates, according to Brigati.

Single-A and triple-B-rated credits, he said, are trading at spreads very close to the lows observed just prior to the market sell-off last March in response to the COVID-19 pandemic.

“This can be a double-edged sword, however, when the market eventually corrects or unwinds, credit spreads usually widen out under such circumstances leading to portfolio underperformance,” Brigati said. 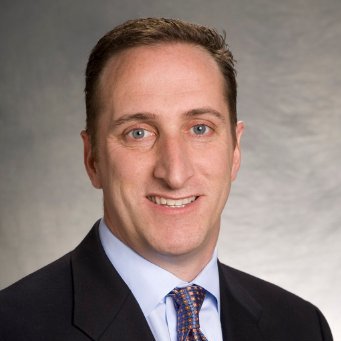 “As much as many participants would welcome higher yields, I am not expecting any change to the market unless something else influences investor participation,” Chris Brigati, managing director at Valley National Bancorp, said.

He suggested investors select the best securities within the lower-rated credits to minimize risk.

On the rate front, Brigati said since the Federal Reserve is expected to continue its accommodative policy, inflation concerns do not appear to be imminent.

“As much as many participants would welcome higher yields, I am not expecting any change to the market unless something else influences investor participation,” Brigati said.

Interest rates, he said, are the highest they have been since last April and with the equity markets near all-time highs, “a corrective move could lead to a flight-to-quality trade in fixed-income.”

As a result, Brigati said that would invariably pull the municipal market along with it toward lower yields.

Economy
Only one piece of economic data was released Tuesday. The National Federation of Independent Business’ Small Business Optimism Index fell to 95.0 in January from 95.9 in December.

The index remains below the average 98. And the future expectations dropped to the lowest level (net negative 23%) since November 2013.

Separately, The Conference Board reported U.S. consumers are turning to the stock market, as the indices soar and savings accounts offer next to nothing in interest.

COVID restrictions limiting in-person spending also played a role in the use of discretionary funds for investing.

“The booms and busts of a few unlikely ‘meme stocks’ have grabbed recent headlines, but the rise of individual investors tells a broader story about spending habits during COVID-19,” according to Denise Dahlhoff, senior researcher at the think tank. “Trends like low interest rates and declining debt concerns — alongside below-normal spending on vacations and out-of-home entertainment due to pandemic restrictions — have left a portion of Americans with more disposable income and fewer ways to spend it. Stocks, which continue to yield strong returns, have become an increasingly attractive option for these consumers.”

Inflation continues to be on the minds of investors. Peter Wilson, global fixed income strategist at Wells Fargo Investment Institute said, “inflation expectations, rather than a rise in real yields, have pushed 10-year Treasury yields up.”

And the curve steepened on “premature speculation of Federal Reserve tapering,” rather than concern the Fed will soon shift from accommodative policy, he said.

Therefore, he expects “the rise in yields will remain relatively benign,” and “further curve steepening should be measured rather than extreme.”

The University of Washington (Aaa/AA+//) is set to price $325 million of taxable and tax-exempt general revenue and refunding bonds on Wednesday. Goldman Sachs is head underwriter.

The City of Downey, California (/AA//) is set to price $113.7 million of taxable pension obligation bonds on Tuesday. BofA is bookrunner.

State use of ARPA ‘revenue replacement’ provision raises concerns
Top Wall Street analysts stand by these stocks as the first half of 2022 wraps up
SPACs wipe out half of their value as investors lose appetite for risky growth stocks
Lagarde hardens ECB’s message on fighting inflation
Stocks making the biggest moves midday: Carnival, FedEx, Zendesk and more