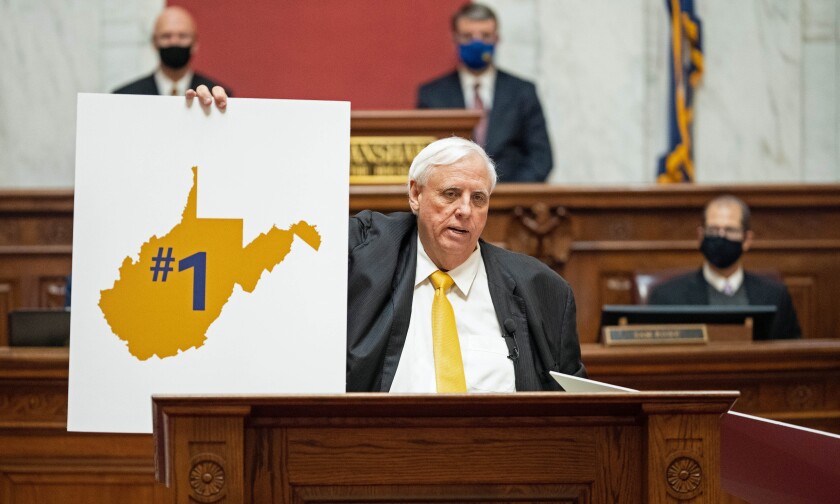 “We are on the launch pad right now. In fact, we’re airborne right now. And that’s why tonight, tonight I am asking all of you to join me to repeal the income state income tax in the State of West Virginia,” Justice said Wednesday in his State of the State address to the state Legislature in Charleston.

In the current year, the state income tax brings in 47% of West Virginia’s $4.6 billion general fund, according to state budget documents.

Justice, re-elected in November as a Republican after first winning office in 2016 as a Democrat, told lawmakers he wants to start by cutting rates by half for most filers, and by a third for top earners.

He also said lawmakers will need to look at a 1.5% hike in the 6% state sales tax.

He also said the legislature would have to go back and look at tiering the severance tax on oil, gas and coal; higher tax on cigarettes and soda; and raising wealth and luxury taxes on those who are “very, very, well to do.” He said the state must also make some small budget cuts.

Republicans dominate the state legislature and their leaders didn’t exactly embrace the idea.

Senate President Craig Blair told WOKW 13 News that Justice’s proposal may be looked at in the upcoming legislative session, but that it could take several years to eliminate the income tax. House Speaker Roger Hanshaw wouldn’t say if the House would pass the changes this session, telling WSAZ News that it was a “lofty goal” that wasn’t going to happen overnight.

West Virginia income tax rates range from 3% to 6.5%, with the top bracket starting at $60,000, according to the Tax Foundation.

“Every good thing Gov. Justice touted about West Virginia tonight — our COVID response, park improvements, the tourism department and investments in our children — is funded through public tax revenues like the personal income tax,” said Kelly Allen, executive director of the left-leaning West Virginia Center on Budget and Policy. “To hear him follow those successes with plans to eliminate our state’s fairest tax during a pandemic is inexplicable.”

“What we didn’t hear is how we’re going to reverse the trend of losing 60,000 people over the past four years,” Skaff was quoted by WSAZ as saying. “There’s nothing about how we’re going to keep our best and brightest here in West Virginia, talk about seniors leaving our state in droves. There’s no specific examples. The money just didn’t add up.”

Justice also delivered a $4.569 billion fiscal year 2020 budget to the legislature, which is almost identical to the previous year’s $4.574 billion.

“You might want to call it a zero growth flat budget,’ said State Revenue Secretary Dave Hardy, “which considering that we’re in the middle of a once-every-century pandemic is pretty remarkable.”

Earlier in the day, state officials delivered a presentation that detailed parts of the plan including the finishing touches in its Roads to Prosperity municipal bond program. The state plans to issue $200 million of road bonds in the first half of the year.

“We do have the last set of Roads to Prosperity bonds,” Hardy said. “Under the statute that was passed by the legislature we have to take the last issue out to market by June 30.”

He added that the state had no plans right now to come to market with bonds from the general revenue fund or the special revenue fund.

Most of the bonds for the $2.8 billion Roads to Prosperity program have already been issued. The program consisted of three types of bonds: grant anticipation revenue vehicle bonds, state general obligation bonds and West Virginia Parkways Authority turnpike revenue bonds.

In 2017, the governor and legislature increased the amount of Garvee debt the state was authorized to incur and allowed the state to sell up to $500 million of bonds for road work. The legislature also passed the Roads to Prosperity Amendment, which placed a referendum before the voters to let the state sell up to $1.6 billion of GOs. It was passed by the voters in October of that year. The legislature also approved the sale of bonds backed by revenue from toll roads that would be used for capital improvements.

“From the standpoint of a roads report, our Roads to Prosperity … 73% of the people voted for it,” Justice said Wednesday. “I promised them we wouldn’t raise additional taxes. We haven’t raised a dime of additional taxes … [but] we still have more to do. And I want to tell you we will continue to do it.”