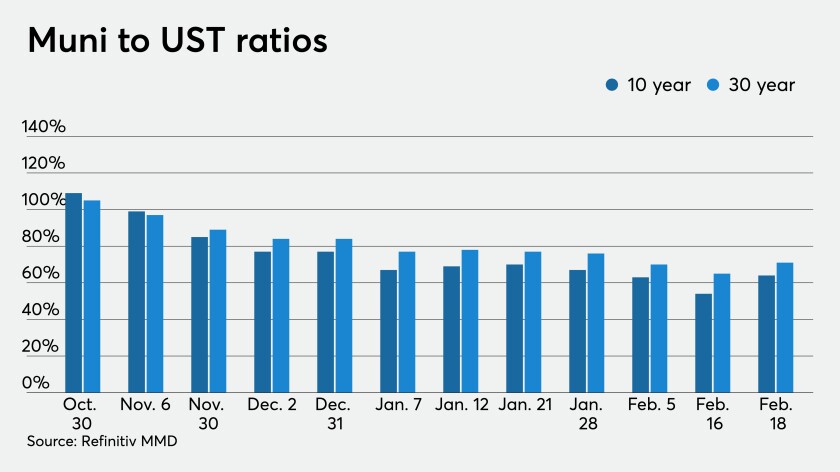 Municipal yields rose on Thursday by as much as six basis points as the correction to higher yields continues, but if inflows are any indication, the technicals (low supply, high demand) surrounding munis won’t allow rates to rise much higher in the near-term.

Those inflows keep coming as Refinitiv Lipper reported $1.955 billion into municipal bond mutual funds, in the latest reporting week ended Feb. 15, down from $2.6 billion the prior week. High-yield muni funds reported inflows of $577 million in the latest week, after inflows of $832 million the previous week.

The rise in yields this week could portend a different inflow story for next, and competitive deals from high-grade issuers in Maryland and North Carolina could help direct benchmarks.

Triple-A benchmarks cut curves by three to six basis points, with the largest moves outside of 10 years.

Fast forward to now, even with the few days of weakness, the ratios are still quite compelling and pushing rich valuations across the muni curve. The relationship tracks with the movements in both markets.

The level to which municipal to U.S. Treasury ratios have declined substantially so far in 2021 is compelling. As a result, taxable equivalent yields (TEY) have moved to ranges where the muni side is equal to or lower than the current UST yield.

Huge inflows into muni funds — with just one outflow report since May 2020 — are helping to create the dynamic of rich valuations (paired with limited tax-exempt issuance), said Kim Olsan, senior vice president at FHN Financial. The longer flows stay well elevated, she and others say, the more exaggerated technical levels become.

“The muni has since moved to parity against the UST rate,” Olsan noted. “Longer-term AAAs netted a TEY nearly 60 basis points above the 20-year UST to open the year, but that premium has shrunken to just 20 basis points.”

There are other reasons for investors’ (particularly retail) relationship with munis.

“Current fund flows are indicative of individuals’ future expectations for tax hikes and the need for tax-exempt allocations,” Olsan said. “There is also the likelihood that the corporate rate moves higher in the next one to two years, adding more value in tax-exempts for bank- and insurance-oriented investors.”

A view from the buy-side
Buy-side players said there is little difference in the overall climate of the tax-exempt market month over month with strong demand and limited supply underpinning the market.

Meanwhile, strength from the high-yield sector continues to reinforce the market — from new issuance to fund flows and fund performance.

“The lack of meaningful supply, which led to municipal bond outperformance relative to Treasuries during January, continues to support the municipal bond market here in February,” Anthony Valeri, director of investment management at Zions Wealth Management in San Diego, said.

Municipals, he said, are proving more resilient than taxable bonds during this week’s sell off.

“While the 10-year Treasury yield has increased to a post-pandemic high of 1.30%, the average 10-year, triple-A muni GO yield has yet to break to a new high,” Valeri said. “I’m seeing triple-A eight to 10-year muni yields up by three to four basis points versus eight to nine basis points for Treasuries.”

February is shaping up like January — with continued heavy demand chasing a limited amount of volume in the primary market and historic inflows into bond funds, market experts noted.

Municipal bond funds saw a record $15.9 billion of inflows amid $95 billion of inflows to long-term mutual funds and exchange-traded funds for January, according to Morningstar. The independent research firm noted the healthy inflows partly stem from the anticipation of potential increased federal support for cash-strapped municipalities.

Valeri of Zions agreed, noting, expectations for the next fiscal stimulus package have increased to between $1.3 trillion and $1.5 trillion, along with the prospects of additional taxes in 2022 and beyond.

“The prospect of higher individual tax rates are returning as a positive catalyst in 2021,” he said.

The political landscape is having an impact on the municipal market in more ways than one, according to Van Eck Securities.

“Demand is being driven by anticipation of both higher taxes and more federal support to state and local governments,” the firm said in a Feb. 17 municipal report.

Additionally, the municipal bond market continues to benefit from both strong demand and limited supply, the firm said.

High-yield issuances, in particular, have been a major beneficiary of expected future fiscal support, and a key contributor to the performance of Van Eck’s own Vectors Muni Allocation ETF, the report said.

The exchange-traded fund had a net asset value total return of 1.33% versus 0.64% for the Bloomberg Barclays Municipal Bond Index, according to the firm.

The Van Eck ETF’s asset allocation mix in January was overweight both high-yield and long-duration bonds, it noted.

“There is a continued strength in the municipal bond market with a bias towards high-yield and long duration investment grade,” the firm wrote.

Initial jobless claims rose unexpectedly in the week ended Feb. 13 and the number for the week before was revised upward.

Economists polled by IFR Markets expected 775,000 claims in the week.

The number of single-family homes where permits were issued where construction hasn’t started rose 9.6% month-over-month and 28.1% year-over-year, he said, as a result of “building material cost increases and delays.”

Import prices jumped 1.4% in January after a 1.0% gain in December, while export prices soared 2.5% after a 1.3% increase a month earlier.

Economists expected import prices to rise 1.0% and exports to grow 0.8%.

The Federal Reserve Bank of Philadelphia’s manufacturing survey’s general business conditions index fell to 23.1 in February from 26.5 in January.

Economists saw the index falling to 20.0.

The six months from now general business conditions index fell to 39.5 from 52.8.

Also released Thursday, The Conference Board said CEO confidence rose to a 17-year high in the first quarter of 2021, as measured by its index which rose to 73 in the quarter from 64 in the fourth quarter of 2020.

The reading was the highest since a 74 in the first quarter of 2004.

“With the vaccine rollout underway in major economies, CEOs entered 2021 historically upbeat,” according to Dana Peterson, the think tank’s chief economist. “They foresee the economy improving further over the next six months. However, setbacks from the pandemic remain a risk to future growth.”

Refinitiv Lipper reports $1.96B inflow
In the week ended Feb. 17, weekly reporting tax-exempt mutual funds saw $1.955 billion of inflows. It followed an inflow of $2.644 billion in the previous week.

The four-week moving average remained positive at $2.242 billion, after being in the green at $2.349 billion in the previous week.

“The market has had a negative tone in this holiday-shortened week,” said Jon Barasch, director of Municipal Evaluations at ICE Data Services said. “Even the hot high-yield market has cooled somewhat the past two days with yields backing off a bit yesterday and today.”