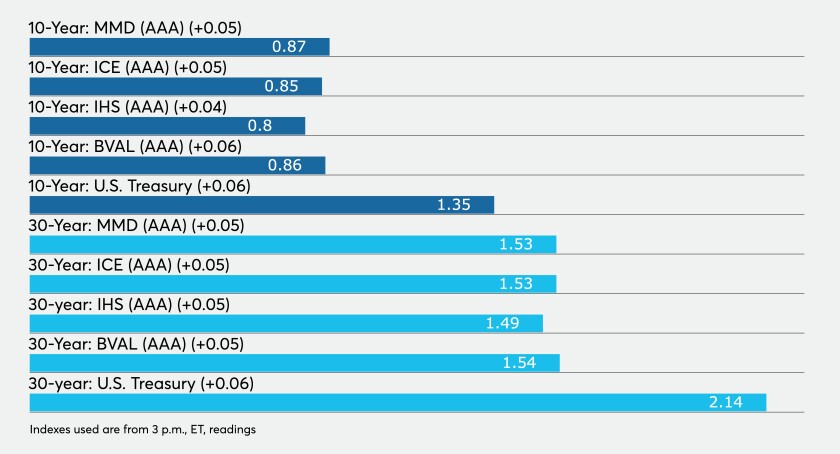 Municipals ended weaker Friday with triple-A benchmark curves rising the most in a week since COVID-19 disrupted all markets in March and April of last year.

Muni yields rose another five basis points on the 10- and 30-year Friday, bringing the total cuts to scales to 18 and 17 basis points, respectively, from Tuesday as the asset class moved closer to U.S. Treasury movements after lagging weakness in taxables since the start of the year. Treasury yields hit 1.35% in 10-years and 2.15% in 30 after news of stimulus out of Washington gaining ground.

“In the past several days, tax-exempts have finally started to react, and while it remains to be seen if the adjustment will be minor or a bigger move, an overall defensive portfolio stance is warranted,” said Mikhail Foux, municipal strategist at Barclays. “At the current extremely low ratios, one could consider whether to buy extremely rich high-quality tax-exempts or simply purchase Treasuries instead, which even accounting for the tax-exemption make more sense, especially for short and medium-dated bonds.”

“We believe that tax-exempts cannot remain this rich forever,” Mikhail wrote. “Technicals will likely change down the line, even if supply does not dramatically pick up; or we could simply see tax-exempts reacting to higher rates, as it makes less and less sense for investors to hold them at current ratios.”

Another muni alternative would be buying taxables, which could also provide shelter from local taxes (i.e. from state taxes), Barclays noted.

“Consequently, we see strong demand for high-quality taxables, which are quite cheap compared with tax-exempts, although AAA spreads have tightened to the tightest levels ever,” Mikhail wrote.

Taxables have been enjoying several months of very strong performance, but if ratios remain low, there could be increased demand for this product from traditional taxable, as well as from some tax-exempt, investors. This would help taxables outperform corporates, as they did in the past two months, the report noted.

Supply picks up the week of Feb. 22 with large issues out of California and high-grade competitive deals from Maryland and gilt-edged Mecklenburg County, North Carolina.

It remains to be seen how the weakness will impact the pricing of the large new deals slated to arrive next week — including the mammoth California higher education deal expected to be priced next Thursday. The Regents of the University of California is coming to market with a two part deal — the larger of which is a $1.6 billion revenue bond offering, as well as a $1.4 billion certificates of participation portion.

Among the other large deals expected to arrive is a $523 million New York City Municipal Water Finance Authority GO offering slated for Tuesday.

Large deals have been oversubscribed for months amid investors’ insatiable appetite for tax-exempt paper.

“The municipal market has been in a good place for several weeks,” Jim Colby, portfolio manager and strategist at Van Eck said Friday.

“With a continuation of inflows — some $2 billion per week for 15 weeks — and supply limited by normal seasonal issues and holiday interruptions, prices have risen, new issues have sold out, and normal valuation metrics, such as muni to Treasury ratios, have been set aside to accommodate the interest in exempt coupons,” Colby said.

In addition, he noted the rising Treasury market could influence more municipal demand.

“Currently, we are seeing a rate adjustment which, perhaps a response to the bear steepening of the Treasury curve, will make re-entry points more palatable for all investors,” Colby said. “With a heavy dose of taxable municipal issuance undercutting overall exempt issuance, I don’t see that demand will do anything but strongly underpin the supply-needy muni market for a while to come.”

“Overall, low housing supply and rising prices continue to be a constraint on an even higher sales pace,” said Mortgage Bankers Association VP of Economic and Industry Forecasting Joel Kan. “The number of homes for sale declined yet again, falling to a record low of 1.04 million units — a 1.9-months’ worth of supply. The median sales price has come down from a record high in October, but at $303,900, it was still 14% higher than a year ago. Tight inventory levels continue to create a competitive market for buyers and are pushing prices higher.”

Separately, Federal Reserve Bank of Boston President Eric Rosengren expects “a robust economic recovery” in the second half as long as a sufficient number of Americans are inoculated by mid-summer.

The economy needs to be rebuilt “in a more inclusive way,” he said, as the “uneven nature of this downturn” suggests.

Since monetary policy hit the zero lower bound, Rosengren said, “fiscal policy is the most effective option” for economic support. “From my perspective, both the monetary and fiscal policy responses have been quite appropriate, given the severity of the public-health-induced economic crisis.”

The Fed released the semi-annual report to Congress ahead of Chair Jerome Powell’s testimony next week.

“Monetary policy will continue to deliver powerful support to the economy until the recovery is complete,” according to the report.

The Fed’s latest Summary of Economic Projections shows the fed funds rate target remaining in a range of zero
to 0.25% until 2023 and it will continue buying $120 billion of securities a month until it sees “substantial” progress toward reaching its dual mandate of stable prices and maximum employment.

Also on March 3, the city will competitively sell $200 million of taxable fixed-rate bonds.

On March 4, an underwriting syndicate led by Jefferies is expected to price the city’s $85 million of tax-exempt stepped-coupon bonds.

During the week of March 22, Barclays and BofA are expected to remarket the city’s $260 million of ARRS

Primary week of Feb. 22
The Regents of the University of California (Aa2/AA/AA/) has several large deals with Jefferies LLC running the books on all of them.