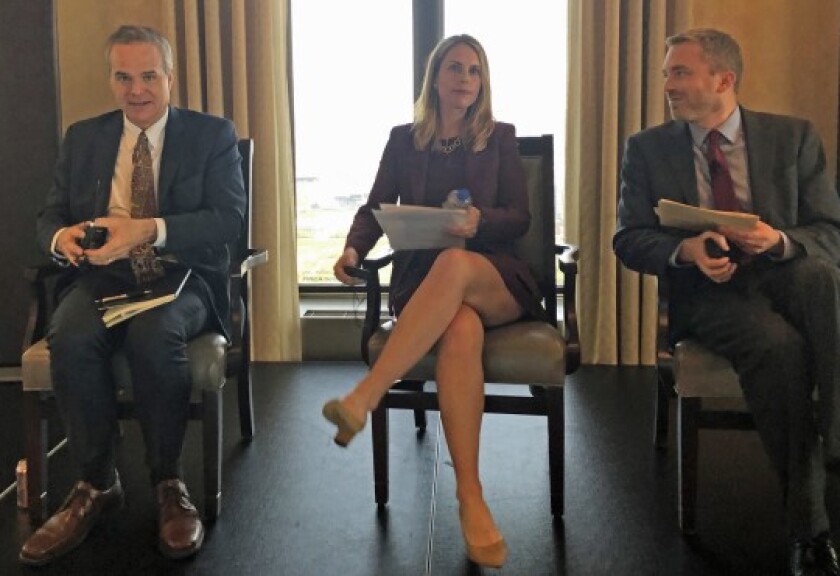 The prospects for new federal aid and a proposed budget that avoids negative rating triggers should preserve Illinois’ investment-grade status, but neither moves the needle on the structural and pension albatrosses.

In addition to higher tax collections and federal Medicaid matching dollars now expected, the budget holds spending level to fiscal 2021. It raises about $900 million in revenue by curbing corporate tax breaks, keeps some funds earmarked for local governments, the capital fund, and transit agencies and delays repayment of some inter-fund borrowing. It does not rely on an income tax or other general tax increases and it does rely on more federal funds as they are not yet approved.

Market participants are considering the proposed budget’s impact on finances against a backdrop that state stands to receive more than $7 billion in direct aid from the Biden administration’s America Rescue Plan. That’s based on congressional estimates of the proposed formula to distribute $350 billion in state and local government aid. Pritzker said he federal relief would go first to pay down the $2.87 billion still outstanding from two Municipal Liquidity Facility borrowings and other short-term or overdue debt.

The budget makes the full statutory-required pension payment set for fiscal 2022, $9.36 billion, and doesn’t rely on federal relief that is not yet approved. Both are factors rating agencies were watching for in Pritzker’s plan, unveiled Wednesday.

“This is certainly a potential fiscal path through a year that will, with any luck, bring the coronavirus pandemic largely to an end,” Moody’s Investors Service lead Illinois analyst Ted Hampton said after an initial review. “Gov. Pritzker’s proposal includes spending restraint and doesn’t rely on cutting pension contributions below statutory levels or other short-term fixes that could dramatically magnify long-term pressure.”

The state’s unfunded liability stands at $141 billion and the system is just 40.4% funded. “The plan, at the same time, lacks a strategy to manage growth in the already very large pension liabilities that constitute the state’s greatest challenge,” Hampton said.

“If they were to have deferred pensions that would have been a negative. Revenues came in much stronger than expected, so there’s a fair amount of positives, but on the flipside the budget has not passed and the federal stimulus is still in question,” said Geoffrey Buswick, S&P Global Ratings’ lead analyst on Illinois. “There are some positives but there are also uncertainties.”

“There’s nothing here that inherently says they are in a meaningful worse situation but there’s nothing that says the negative outlook” could come off tomorrow and the rating agency will be looking in rating assessments at the state’s broader economic recovery which extends beyond the budget’s impact, Buswick said.

Fitch Ratings, Moody’s, and S&P all moved the state’s outlook to negative last spring due to concerns over the pandemic’s impact. Fitch additionally cut the rating by one notch, which brought it in line with Moody’s and S&P at one level above speculative grade.

Analysts cautioned their comments were based on an initial review and that the final budget enacted ahead of the July 1 fiscal year start that will be most telling.

“In reviewing the executive budget, our focus remains the state’s ability to make progress towards structural balance — lining up its recurring spending demands with recurring revenues. We do not expect the state will achieve structural balance with this budget, or in the near-term,” said Fitch’s lead Illinois analyst Eric Kim. “Even with the improvement in the revenue forecast, that is a difficult task for Illinois and that’s reflected in the current rating and outlook.”

While the lack of structural balance is factored into the current credit status, Kim said, the agency will be looking at whether the proposed budget includes any measures that could have negative long-term credit implications that make it more difficult for the state to rebuild some measure of fiscal resilience.

The lack of rating triggers in the proposed budget, rosier revenue projections and likelihood of some new relief have pushed market worries over a cut to junk to the backburner. Market jitters rose after the shifts to negative outlooks, and the state’s May bond sale saw record spread penalties of more than 300 basis points to the Municipal Market Data’s AAA benchmark.

The failed constitutional amendment on the November ballot to move to a graduated income tax rate structure further fueled market worries over the state’ ratings, even as Biden’s win was perceived as a plus for aid prospects. Pritzker championed the tax change as a means to generate $3 billion annually by raising the tax on top earners.

The state’s spreads have since shrunk dramatically and are currently at 125 bps seven years and out, but that’s due to demand for higher yielding paper and federal aid prospects. The state is planning a spring new money issue with about $2.9 billion of capital borrowing planned in fiscal 2022 and $2.6 billion in fiscal 2023.

The federal funding in hand and prospects for more aid provide the state with “a short-term reprieve” and “an opportunity,” said Howard Cure, director of municipal bond research at Evercore Wealth Management LLC.

“They have an opportunity to address their entrenched budget issues” led by pensions and the lack of actuarial funding, he said. “This initial proposal doesn’t seem to make the hard decisions.”

Larger economic issues loom, like the pandemic’s impact on the property tax base and valuation and tourism and population trends once the federal spigot propping up governments and the economy ebbs, Cure said. That means state spreads will remain susceptible more than many governments to market appetites and supply issues.

The governor faced a tough balancing act given the pandemic’s social and fiscal toll, said Laurence Msall, president of the Civic Federation Federal of Chicago, a local government watchdog organization.

While the group is still digging into budget details, Msall credits the administration with “artfully developing a one-year spending plan that doesn’t rely on federal support and does not require heavy lifting” with the legislature’s Democratic majority.

It makes the statutory required payment and, while relying on some one-shots, generally avoids red flags like a pension payment re-amortization. The decision to cut local government income tax sharing by 10% and withhold for a second year the $350 million in education aid faces pushback among the Democratic majority, but the administration counters that both stand to benefit from federal aid. Republicans calls the elimination of corporate tax breaks a tax hike, but they are in the minority.

“The governor deserves credit and is positioning himself to show he is managing the financial responsibilities of the state without” a tax hike, Msall said. “But on the other hand, it isn’t a long-erm plan that will stabilize or improve Illinois’ credit rating.”

The budget will be considered under new House Speaker Chris Welch of Chicago, who Democrats chose last month to replace longtime Speaker Michael Madigan who is embroiled in a federal corruption probe although he has not been charged with wrongdoing. Madigan, who ruled the House with an iron fist, on Thursday announced plans to resign his seat. Senate President Don Harmon of Oak Park, also a Democrat, is entering his second year at the helm. Pritzker is a Democrat.

Given the legislative changing of the guard “there should be opportunity for more aggressive experimentation and modernization and a fresh approach,” Msall said.