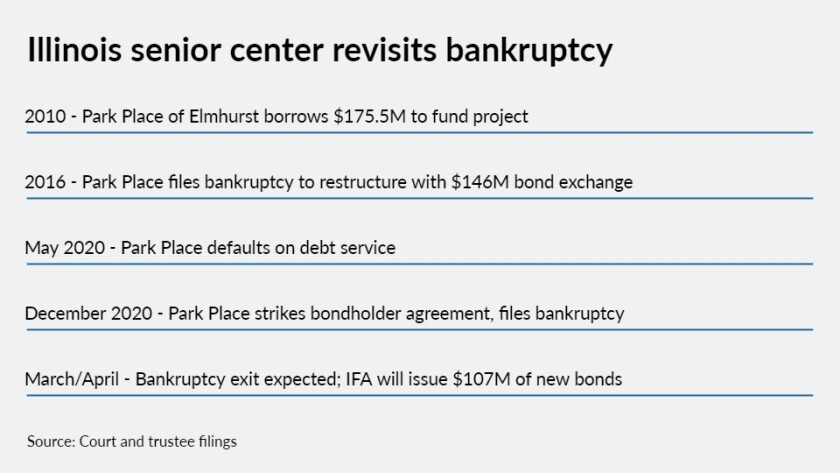 A suburban Chicago senior living retirement facility is on track to exit bankruptcy next month — for the second time — with creditor voting now underway and conduit issuer approval for its restructuring bonds in hand.

The restructuring gives the facility more breathing room by requiring bondholders to take a haircut and wait longer to recoup their investment.

The Park Place of Elmhurst, in the western Chicago suburb of Elmhurst, filed for Chapter 11 bankruptcy in December after reaching agreement on a restructuring with holders of a majority of principal from the $141 million remaining from $146 million of bonds issued in 2016 through the Illinois Finance Authority.

The COVID-19 pandemic, which has hit many retirement communities hard, hasn’t helped the facility’s fiscal woes but it’s not blamed for the restructuring, its second since opening in 2012. Park Place, which has 300 residents, has fared well compared to many peers.

The 2016 bonds were issued to exit its previous bankruptcy in exchange for the remaining principal from the initial $175.5 million unrated 2010 issue.

The court approved the facility’s disclosure statement at a hearing late last month and the IFA signed off on the restructuring bonds at its monthly meeting earlier this month. Creditor voting, which includes bondholders, ends March 5 and a confirmation hearing is set for March 16 in the United States Bankruptcy Court for the Northern District of Illinois, Eastern Division, according to trustee filings.

“The proposed refinancing will reduce the borrower’s total debt outstanding, while lowering coupon rates and extending the maturity date of the new series 2021 Bonds, resulting in lower debt service payments,” IFA executive director Christopher Meister wrote in his board message. “Despite its challenging debt structure, the borrower has maintained the quality of life for its residents – a very beneficial outcome.”

The bonds have recently traded at 73 cents to 76 cents on the dollar, according to data on the Municipal Securities Rulemaking Board’s EMMA website.

The replacement bonds are expected to be sold in early April. The restructuring will cut debt to $107.27 million from $141.11 million “significantly deleveraging the project” with annual debt service dropping by $1.2 million, according to IFA documents.

The payments will be interest only for the first three years and the principal will then be amortized over the next 37 years with the first annual principal payment to bondholders occurring on May 15, 2024.

The Series 2016C Bonds will be repaid by the sponsor in a pro-rata share of $725,700 which amounts to a meager 3% of the approximately $21.92 million of outstanding principal plus 3% of the accrued but unpaid compounded interest.

The Series 2016C Bonds were issued as a “hope” note approved in connection with the Series 2016 Restructuring, payable only from excess cash and to date only one payment of approximately $24,000 in interest has been triggered and paid, IFA documents said.

The 2016 restructuring was blamed on the real estate market, leading to struggles to fill units, and the facility now says it fell short of fixing its structural financial problems. The 2016 C bonds mature in 2055 and represented a 15% principal payment of the 2010 bonds while the original 2010 holders received 85% of principal in the 2016 A and B series. The primary benefit of the 2016 restructuring for the facility was that it eased payment demands by extending the maturity to 2055 from 2045.

Park Place turned to a consultant in 2019 to review appropriate estimates on morbidity and concluded residents at Park Place “were living longer than expected, which is an altogether good thing which happened to have a negative impact on Park Place’s cash flow” as new entrance fees fall short of expectations, court filings say. Park Place currently has a waiting list.

That led to a May payment default reported by bond trustee UMB Bank. Bondholders granted the facility a forbearance against action on the defaults in May and it was later extended to November as restructuring terms were negotiated.

The number of retirement projects defaulting for the first time last year increased by 150% to 30 from 12 in 2019, according to a Municipal Market Analytics default report published this week. The 30 first-time defaulters in 2020 represented 2.95% of all outstanding senior living sector par as of Jan. 1, 2020. In 2019, the 12 defaulters accounted for 2.22% of outstanding par on Jan. 1, 2019. There have been nine first-time defaults so far this year.