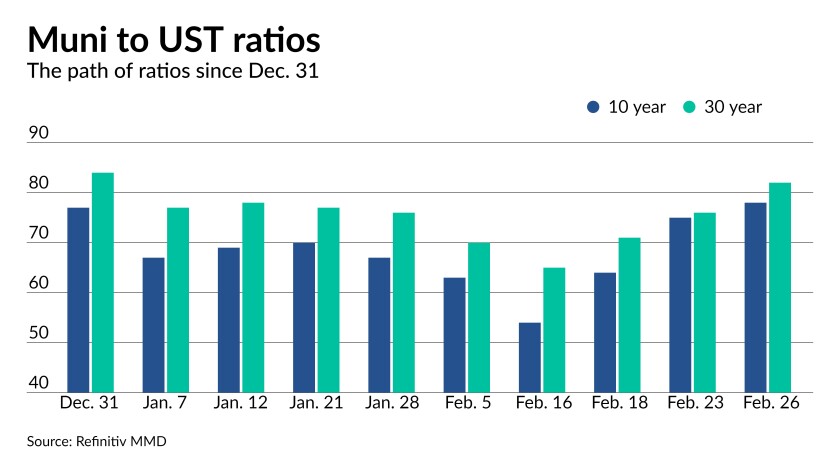 Municipal bonds were little changed Friday after a sell-off in global bond rates helped send muni yields more than 40 basis points higher on the 10- and 30-year triple-A benchmark since the rout began on Feb. 17.

The market took a much-needed breather Friday and U.S. Treasuries pared Thursday’s losses to see the 10-year fall 12 basis points to 1.42% and the 30-year 17 basis points to 2.11%. Municipals were steady at 1.14% in 10 years and 1.82% in 30 years as trading was light but steady and participants readied for a new month and about $6.2 billion of new issues to kick it off, led by $1.25 billion of tax-exempt and taxable general obligation bonds from New York City.

While there was a pause in the municipal market correction on Friday, there was a still a bittersweet climate as investors applauded the higher yields attained earlier in the week while issuers were slightly precautious about selling new debt next week.

“The market has been through a lot in the last week and today was just a day for the market to catch its breath,” a New York trader said.

He noted new issues continue to garner strong demand although the higher yields are a little daunting for issuers of large deals.

Primary Market
Among the new issues debuting next week at the new levels is a $1.25 billion New York City (Aa2/AA/AA-/) general obligation offering will dominate the calendar when the three-series deal is priced by BofA Securities.

The University of Chicago (Aa2/AA-/AA+/) is set to sell $609.6 million of taxable corporate CUSIP fixed-rate bonds, serials 2044-2052, in a Citigroup-priced negotiated deal.

The refunding portion consists of $204.9 million Series HE-A and a $25 million taxable series.

The larger of the offerings is a $372.3 million deal consisting of three series.

The authority’s other deal is $354.3 million and consists of federally taxable fixed-rate bonds in a single 2021 Series F-2.

The taxable series 2021 bonds are structured to mature from 2022 to 2041 and is being priced by Barclays Capital Inc.

The City of Orange, California, will sell $285.6 million of taxable pension obligation bonds in a deal being priced by Stifel, Nicolaus & Co. Inc.

Columbia, South Carolina, is set to price $120 million of waterworks and sewerage system refunding revenue bonds in a taxable series 2021 B structured as serials between 2023 and 2036 and terms in 2041 and 2049. The deal will be priced by Raymond James & Associates Inc.

Mississippi (Aa2/AA/AA/) is set to price sell $119.7 million of taxable GO refunding bonds. The issue will be priced by Wells Fargo Securities.

The National Finance Authority (A2///) on behalf of the VA Birmingham Health Care Center project is set to price $106 million of taxable federal lease revenue bonds in a federally taxable deal priced by Oppenheimer & Co.

Economy
Stimulus payouts and added benefits for the unemployed helped personal incomes jump 10% in January, following a 0.6% gain a month earlier. Personal consumption expenditures climbed 2.4% after a 0.4% decline in December.

Economists polled by IFR Markets expected a 9.9% spike in income and a 2.5% increase in consumption.

“In the absence of the stimulus checks, personal income would have been flat in January; personal income excluding government transfers declined 0.1% for the month,” according to Wells Fargo economists Tim Quinlan and Shannon Seery.

Morgan Stanley researchers expect the next stimulus package, which should come in March, will push up savings, “adding to a powerful tailwind of buying power that has been building among U.S. households — ready to be deployed as the economy is reopening.”

“Both measures of inflation revealed a modest acceleration but remained well below the Federal Reserve’s target of 2%,” noted Grant Thornton Chief Economist Diane Swonk. “The Fed will look past both of those increases as they are expected to be transitory. Any flare in inflation we see tied to the surge in demand from an easing in social distancing would have to show up as a sustained acceleration in wages to be persistent. That has not happened in four decades, which is why the Fed is skeptical it will happen today.”

Morgan Stanley sees PCE inflation peaking near 2.6% in April and May. “On balance, data for January has largely beat expectations, pointing to stronger-than-expected growth in 1Q21,” they said.

Also released Friday, the Chicago Business Barometer dropped to 59.5 in February from 63.8 in January, as new orders and productions posted the biggest drops in the month. Employment was the largest gainer.

“Demand eased markedly in February with new orders dropping 11 points, its lowest level since August 2020,” according to the release. “Similarly, production shed 9.3 points, following two consecutive months of gains. Anecdotal evidence provides a mixed picture, with some firms experiencing a downturn due to the pandemic, while others report strong consumer demand.”

The University of Michigan’s consumer sentiment index’s final February read was 76.8, up from the preliminary 76.2, but down from the 79.0 posted in January. Economists expected a bigger drop to 76.5.