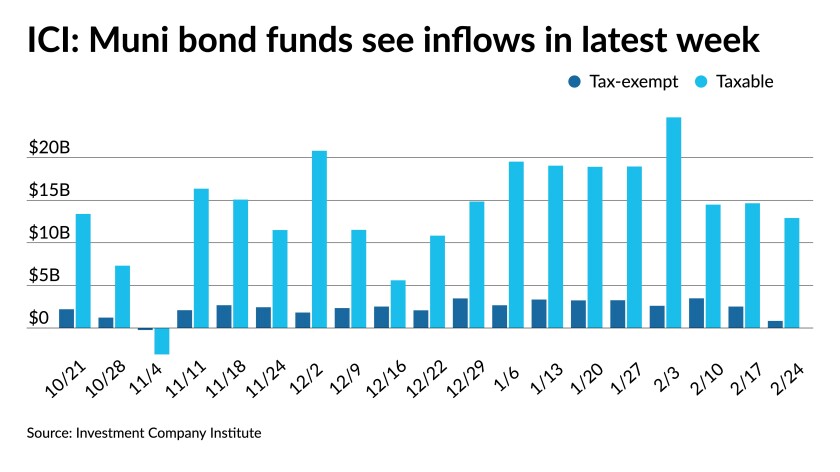 Primary pricings showed investors comfortable moving in at higher yields with competitive deals from gilt-edged Baltimore County, Maryland, at or through triple-A benchmarks. The University of Chicago came to market with $351 million of corporate CUSIP bonds, scaling back from a planned $600 million deal.

The Investment Company Institute reported $831 million of inflows into municipal bond mutual funds but $398 million of outflows from exchange-traded funds for the week ending Feb. 24. Flows from Refinitiv Lipper to be reported Thursday may be more telling of how the full sell-off has affected the funds, as ICI reports with a lag and Wednesday’s figures do not include last week’s market moves.

Ratios fell slightly with the diversion of muni to UST yields Wednesday. The 10-year muni/UST was reported at 78% and the 30-year at 80%, according to Refinitiv MMD. ICE Data Services showed ratios at 75% in 10 years and 81% in 30.

For Wednesday, though, investors were engaged in both the primary and secondary.

“The market has been rich to Treasuries for a while now and the weakness we have seen [last week] was due, but I believe that there is strong support for municipals going forward,” Roberto Roffo, managing director and portfolio manager at SWBC Investment Company, said Wednesday.

The bellwether deal this week — the $1 billion New York City general obligation offering — exemplified the existing and continued strong buy side demand and was priced attractively.

The deal received over $800 million in retail orders after the two day order period.

“Based on the retail order period for the New York City deal I believe that the back up in yields has strengthened the demand for municipal bonds from retail investors and left professional money managers looking for a spot to start buying bonds,” Roffo said.

“With cash flows still positive from retail investors, cash has been building on the sidelines and looking for an attractive entry point,” Roffo noted.

Cash, he said, should put a ceiling on how high municipal rates can go.

The current market technicals, fueled by future government aid, should keep the market strong in the near term — despite some challenges.

“Investors still understand that the new administration has promised to raise taxes, the supply of new bonds will be lower this year, and the economic effects of COVID-19 are still lingering,” Roffo explained.

But, the new relief package from Congress will also help states and municipalities strengthen their financial positions and “relieve some the fear present in the municipal market,” he said.

ETF muni funds alone saw an outflow of $398 million after an inflow of $404 million in the prior week.

Improving economy, but Fed will stay quiet
Although Wednesday’s indicators missed to the downside, a report of economic activity showed improvement, and economists see inflation rising, but not at a troubling rate, which will allow rates to remain near zero for a couple of years, in contrast to market fears.

Modest expansion of economic activity occurred in the six weeks from January through mid-February in most Federal Reserve districts, according to the Beige Book, released Wednesday by the Fed.

Businesses reported optimism for the next six to 12 months, as more people will be vaccinated.

“On balance, commercial real estate conditions in the hotel, retail, and office sectors deteriorated somewhat, while activity in the multifamily sector remained steady and the industrial segment continued to strengthen,” according to the report.

Sarah House, senior economist at Wells Fargo Securities, expects the Fed to “be on hold” at least through the end of next year. She expects inflation in that period to slightly exceed the Fed’s 2% target, perhaps by 25 basis points, which “might not be enough to make the Fed move immediately.”

Fed members could raise their inflation expectations when the next Summary of Economic Projections is released after its April 27-28 meeting, House said during a webinar.

The labor market weakness, if it persists, could “keep the Fed on the sidelines” if inflation expectations don’t surge, she said.

While signs suggest inflation will be higher, the question, she said, if how high and for how long. “consumers have the means to spend and will be eager to, setting up demand inflation” when the pandemic ends.

Scott Colbert, executive vice president and chief economist at Commerce Trust Co., said, “With interest rates as low as they are today, bond fund investors are rightfully worried about what could happen if (or when) interest rates begin to rise.”

However, he said, while rising interest rates result in lower bond prices, “the reinvestment of all maturities and coupons compounds at those higher rates, over time offsetting the decline in bond prices.”

Gradual rate hikes, he said, would push projected cumulative returns for investors in intermediate bond portfolios from about 6.1% over the next decade to 8.4%. “And amazingly, if rates spike up immediately, the return increases to almost 20.4% as higher coupons offset the initial negative return by the third year,” Colbert said. “Ironically, bond investors should be rooting and cheering for higher rates rather than fearing them. This is why we do not encourage investors to abandon the bond market or to move materially short in maturity with their investment allocation.”

As the Fed cuts its asset purchases and starts raising rates, which Colbert sees in about two years, this could “over a two-year period push cash yields to something approaching 2% once again. But that’s probably four years from now.”

Inflation could go as high as 3.5% on an annual basis for about six month, he said, before “a slow and steady decline” begins, with rates “hopefully … north of 2% for a period of time.”

Economists polled by IFR Markets expected 170,000 jobs to be added.

“The labor market continues to post a sluggish recovery across the board,” said ADP Chief Economist Nela Richardson. “We’re seeing large-sized companies increasingly feeling the effects of COVID-19, while job growth in the goods producing sector pauses. With the pandemic still in the driver’s seat, the service sector remains well below its pre-pandemic levels; however, this sector is one that will likely benefit the most over time with reopenings and increased consumer confidence.”

The report was “disappointing given the growing optimism for a quickening economic recovery,” said Marvin Loh, senior global macro strategist at State Street. Despite a 26,000 increase, leisure and hospitality posted its second-to-worst showing since April, he said.

While restrictions and lockdowns have helped curb the number of new infections, they “are certainly at play in these figure,” Loh added. ”Some of what is encouraging is that the education and healthcare sectors showed some of the stronger gains at a sector level, as schools start to reopen and the pace of vaccinations quicken.”

While the labor market continues to improve, he said, “slowing pace of gains in the ADP report pushes against a view that we have seen a quickening recovery at the start of the year.”

While the employment report “has not matched the results from ADP well since the start of the pandemic,” Loh added, “expectations of a February rebound in the official employment data to be released this Friday is unlikely to change.”

Separately, the Institute for Supply Management services index fell to 55.3 in February from 58.7 in January.

The business activity/production index fell to 55.5 from 59.9.

“There was a pullback in the rate of growth in the services sector in February,” said Anthony Nieves, chair of the ISM services business survey committee. “Respondents are mostly optimistic about business recovery and the economy.”

The downturn “is jarring after a run of better-than-expected economic indicators in recent weeks,” said Wells Fargo Senior Economist Tim Quinlan. “There is no one-off factor here that cushions the blow.”

Spending on services should soon surge, he suggests, as the number of new COVID cases has dropped, but apparently there were no signs of this growth in February.

The prices paid index, at 71.8, is at its highest level since the fall of 2008. “This reading need not imply runaway inflation; what it does say is that prices are rising across the service sector,” Quinlan said. “To that point, 16 out of 17 industries surveyed reported higher prices.”

Weather probably played an issue in the slide in the index, said Roiana Reid, U.S. economist at Berenberg Capital Markets. But, the index still suggests expansion in February.

“We expect sentiment to jump in the coming months as vaccines become widely distributed, states lift restrictions, and persons gain enough confidence to resume certain activities,” she said. “Employment growth in the service sector is set to re-accelerate.”