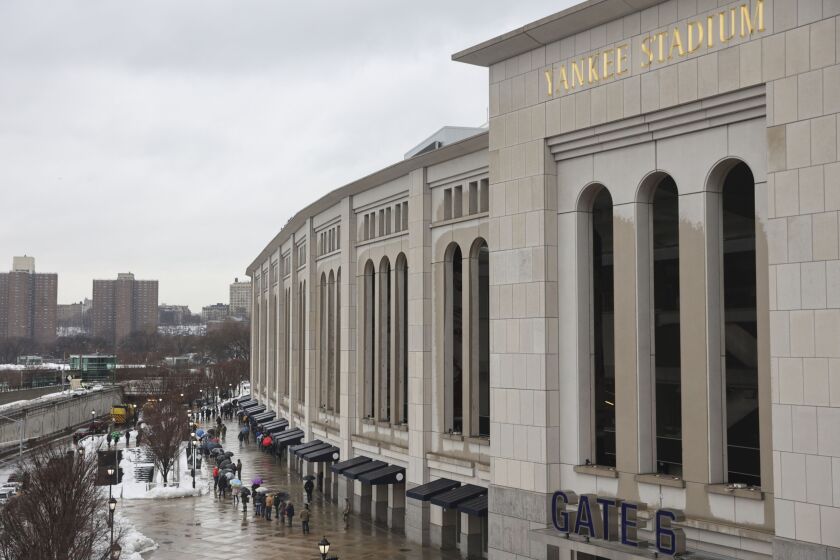 Fans have begun returning to New York sporting events, though at limited capacity. Soon, arts and entertainment venues can do likewise.

This bodes well for a city that has been reeling economically since COVID-19 took hold a year ago. It lost about 570,000 jobs in 2020.

Reopenings in New York and elsewhere represent a push-pull over measures to emerge from a lingering pandemic. Five states, including Texas and Mississippi, have rolled back mask mandates, while Biden administration officials have struck cautious tones. Health officials have warned about new coronavirus variants, including one that federal officials trace to Manhattan’s Washington Heights neighborhood.

“Now is not the time to relax restrictions,” Rochelle Walensky, director of the Centers for Disease Control and Prevention, said at a recent White House briefing.

In the Northeast, several states are reopening arenas and other venues to limited crowds.

“The public health issue is a paramount one, but the economic issue and the impact on important sectors of our city are also very, very key,” New York State Comptroller Thomas DiNapoli said in an online discussion.

“I have missed Broadway. I have a personal love of the opera. I’ve certainly missed those opportunities for relaxation and cultural enrichment, and we all have our favorite activities that we’ve been missing out on.”

A report by DiNapoli’s office painted a dark picture.

NYC & Co., the city’s convention and visitors bureau, estimated that nearly 67 million tourists visited in 2019 and accounted for $70 billion in economic activity. In 2020, however, it expects that number to have plummeted to 23 million.

“Until the sector is able to fully reopen, tourism will remain subdued,” DiNapoli said.

As of December, arts, entertainment and recreation employment in the city dropped by two-thirds from one year earlier, the largest decline among the city’s economic sectors. In 2019, by contrast, those sectors had employed 93,500 people in 6,250 establishments. These jobs had an average salary of $79,300 and generated $7.4 billion in total wages.

“The numbers really are stark and devastating,” DiNapoli said.

“From a sports perspective, and you can extend that to entertainment and arts as well, they’re more essential than most people give them credit for on a regular basis,” he said. “Things like sports, people are eager to get back to it or to a certain extent, work.”

New York fans returned to Madison Square Garden in Manhattan, Barclays Center in Brooklyn and Nassau Coliseum in Uniondale, Long Island, under a state-imposed 10% maximum capacity. Barclays Center has been maxing at 300 fans to start, but intends to expand that after the National Basketball Association’s All-Star break.

And baseball season is looming for the Yankees and Mets, both of which play in bond-financed stadiums.

New Jersey limits for indoor and outdoor are 10% and 15%, respectively.

If all visitors present proof of a negative COVID test upon entry, capacity can increase up to 150 people indoors and up to 500 people outdoors, Cuomo said. Social distancing and face coverings will be necessary, as well as adherence to state Department of Health guidance.

“Everybody wants all restrictions gone. Everybody does. Yes, but you also have to be smart about the reopening,” Cuomo said. “In my opinion, some states are going too far too fast and that is a danger because COVID is still a risk and you relax those restrictions too far, you will see the beast rise up again.”

Entertainment benefited from the federal Pandemic Unemployment Assistance program intended for independent contractors and self-employed workers. Federal Paycheck Protection Program loans supported 62% of firms and 70% of employment in the sector, according to DiNapoli.

A new federal relief package would provide $15 billion nationally for shuttered live venues and $284 billion in funds for more PPP loans through March.

“This package, the one in December and the new bill, will hopefully be helpful to New York in just about every way that we need help,” said U.S. Senate Majority Leader Chuck Schumer, a Brooklyn native.

The hit to the arts industry extends well beyond the headlined Broadway theaters, he added.

“In the arts, it wasn’t just Broadway, it’s these little arts, these independent venues, these independent theaters that were all going to close,” Schumer said on a webcast hosted by think tank Regional Plan Association. “We have the PPP program which is the small business program like the arts, like the restaurants, it just wasn’t enough.”

President Biden’s proposed $1.9 trillion relief bill, which is before the U.S. Senate and under which the city would receive $5.6 billion, would set aside about $270 million in grants for arts and humanities organizations and museums, and another $23 billion is available through federal loans programs to help small businesses and not-for-profit organizations.

“Many of our organizations are more than just theaters. Performing arts is not a monolithic industry,” said Sade Lythcott, chief executive of the National Black Theater in Harlem who also chairs the Coalition of Theaters of Color. “New Yorkers want and need dance and music and theater back in their lives.”

Voza Rivers, an award-winning producer, chairman and co-founder of the Harlem Arts Alliance and executive producer of the New Heritage Theatre Group, likened efforts by arts groups to the post-Sept. 11 recovery. Their work, he said, extends beyond local production.

“We are local but we’re global,” he said. “We’ve had a number of our presentations leave our small 100-seat theaters and go on to bigger theaters and to Broadway.”

The fortunes of arts and entertainment also resonate in other aspects of state and city budgeting policy, such as affordable housing. Variables include vaccine-rollout efficiency, crime levels and confidence in the mass-transit system.

“I’m always arguing with HPD that we need more affordable housing in the borough of Manhattan,” Manhattan Borough President Gale Brewer said, referencing the city’s Housing Preservation and Development unit. “Inwood has great artists, the Battery has great artists. The concern, even for the greatest artists, is that they’re going to other cities because it’s too expensive.”

Unknown for now are how many people will go back to concerts, plays or sporting events after a full year of sitting at home and, whether people are willing to endure complexities such as required PCR testing within 48 hours of an event. This on top of post-9/11 security protocols.

“There are new habits, new regimes,” NYU’s Igel said. “Some people might ask, ‘is it really worth it?’ Going through layers of things, even though New Yorkers are used to them.”

In an attempt to fast-track the process, New York State has launched Excelsior Pass, a pilot technology program at MSG and Barclays that confirm a person’s vaccination or a recent negative COVID-19 test. Akin to a mobile airline boarding pass, fans can print out their passes or store it on their smartphones using a “wallet app.”

Levels of confidence in mass transit factor in as well. MTA Chairman Patrick Foye, whose agency has undertaken deep-disinfecting throughout the subway-and-bus system and is also facing a spike in crime, said the impact of COVID is pronounced.

“It will have an impact on transit agencies across the world in the short, intermediate and long term. I think the disinfecting regimes are here to stay,” Foye told reporters after a board meeting. “I’m not an epidemiologist. I don’t know about variants. I don’t know about the next pandemic, but the experts talk about those risks, and what the country and the world ought to do to prepare for those.

“We’ll have long-term plans about the next pandemic, the next variant. I think there will clearly be changes in ridership and ridership patterns. Even now, the timing of the morning rush and the evening rush has changed,” he said.

“There are going to be a number of financial and operating and social and transportation considerations that are being thought about and will be grappled for years and decades to come.”