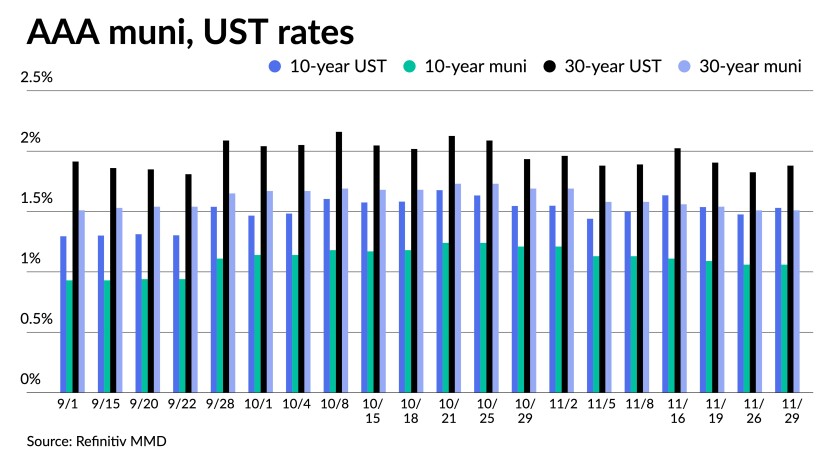 Municipals were little changed Monday while U.S. Treasuries pared back some of Friday’s gains and equities rebounded as markets generally calmed after initial Omicron fears were digested.

Economists don’t appear to be too concerned about the latest COVID-19 variant.

“Even if Omicron causes another pandemic wave, it is more likely to slow rather than interrupt a currently rapid global economic recovery,” said David Kelly, chief global strategist at JPMorgan Funds.

While each variant concerns investors and the public, they “should have a diminishing impact on the economy,” he said. “Many people have simply mentally moved on from the pandemic and will not accept further restrictions on their activities, even with a continued public health threat, particularly for the immunocompromised or unvaccinated.”

Others, who have been more cautious, will continue to employ Zoom, online purchases and mask wearing to protect themselves, Kelly said. “Travel and entertainment could remain somewhat depressed if a new wave emerges,” but other sectors of the economy “would likely see very little disruption and, as has been the case over the past two years.”

Should this variant spark another wave of infections, he added, it would “likely end speculation concerning an early Fed rate hike.” Omicron could weaken demand, he suggested, “taking the edge off recently high inflation.”

The secondary muni market was lightly traded providing little guidance for triple-A benchmarks as the market awaits a larger calendar to begin the final month of 2021.

As the calendar grows, issuers will have to coordinate market entry into year-end business but the first of two rounds of redemptions coming Dec. 1 should offer enough buffer, said Kim Olsan, senior vice president at FHN Financial.

“Current inquiry will find the curve slope working in its favor, even if absolute yields have declined from earlier in November,” she said, noting in the five- and 20-year buckets, “extension is being rewarded to near the steepest levels in the last three months.”

“Of course, any move lower in yield will incent buyers out the curve no matter what, just at reduced value,” Olsan said. “Overall volume, though, has notched slightly higher in November than in the prior 10 months, averaging about $9 billion par value per day.”

The four-week moving average remained positive at $1.155 billion, after being in the green at $1.074 billion in the previous week.

Treasuries were weaker and equities rebounded.

If inflation remains at a 5%-6% rate, the Federal Reserve will have to taper quicker and raise rates to get inflation in check, he said. El-Erian has been warning that inflation is too high and isn’t transitory.

They expect only one rate hike next year, fewer than the market does. “The fiscal calvary won’t come again for additional waves of COVID cases/mutations, but instead it will be on central banks to counter economic headwinds from COVID with accommodative policy,” they said.

The inflation situation makes the possible impact of the variant worse, said Jason Brady, president and CEO at Thornburg Investment Management. “An already difficult supply chain picture, strong jobs growth and a new variant increasing challenges of the first, really puts the Fed behind the curve and the eight-ball.”

While each variant gets its own reaction from the markets, and “Omicron’s impact is unknown,” he said, “investors already know what lockdown looks like.”

Expect “different” markets next year, Brady said, “even if we see some of the same challenges — like a new COVID variant.”

In data released Monday, pending home sales surged 7.5% in October after a 2.4% decline in September, but remain 1.4% below year-ago levels.

“The notable gain in October assures that total existing-home sales in 2021 will exceed 6 million, which will shape up to be the best performance in 15 years,” said National Association of Realtors Chief Economist Lawrence Yun. Price increases will slow in the next few months and demand will slip as mortgage rates climb, he said.

Most respondents expect supply issues to continue for at least a half year.

The Successor Agency to the Redevelopment Agency of the City and County of San Francisco (/AA///) is on the day-to-day calendar with $107.34 million of taxable third-lien tax allocation social bonds, 2021 Series A (affordable housing projects), serials 2023-2031, insured by Assured Guaranty Municipal Corp. Citigroup Global Markets.