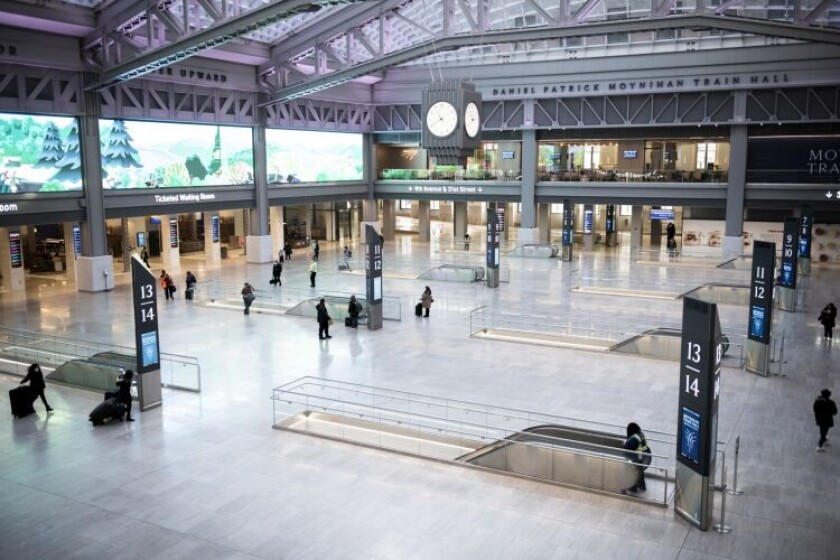 The refinancing will add up to $80.5 million to the $526.5 million TIFIA loan to the Empire State Development Corp. that closed in 2017, the U.S. Department of Transportation said Monday. The additional loan capacity will ensure completion of security and passenger safety initiatives.

The hall, named after the late U.S. Sen. Daniel Patrick Moynihan, is now the arrivals-departures hall for all Amtrak passengers in New York City. It also provides ticketing and other facilities for the Metropolitan Transportation Authority’s Long Island Rail Road service.

To date, the bureau has provided more than $36.2 billion in financing through the TIFIA credit program.

The overall Penn Station project — formally the Empire Station Complex — is a work in progress that Gov. Kathy Hochul inherited from predecessor Andrew Cuomo after his resignation in August.

Hochul recently said that the rebuilding of the existing overcrowded station underneath Madison Square Garden would take priority over the office-tower component. She said the overall would cost around $7 billion and take up to five years.

The Empire Station Coalition, which consists of 12 civic organizations, opposes the razing of “historic and architecturally significant” buildings near the station, including the Hotel Pennsylvania.

The coalition, along with ReThinkNYC, has proposed an alternate plan that would rebuild the original Penn Station — razed in the 1960s for the construction of the Garden — while preserving the buildings.

It also looks to convert Penn to a through-running station for commuter trains.

JPMorgan shares fall 6% after CFO lowers guidance on ‘headwinds’ including wage inflation
Uruguay reportedly installs its first Bitcoin ATM
Activist hedge funds launched 89 campaigns in 2021. Here’s how they fared
Earnings season is the next big test for the market and value stocks in the week ahead
The Most Expensive U.S. Real Estate Sales For 2021